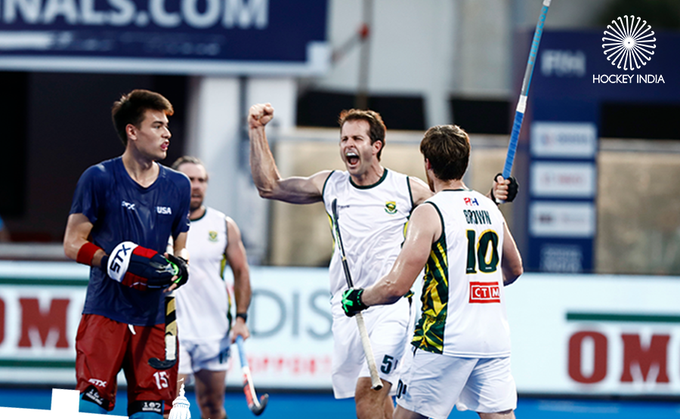 Republic of South Africa reserved its berth in the Olympic Qualifier edging out a spirited United States of America 2-1 in the FIH Series Finals at Kalinga Stadium in Bhubaneswar.  South Africa will now play the winner of the India-Japan second semi-final on Saturday.

The two finalists become automatic qualifiers for the Olympic Qualifier to be played later this year.

Americans put up an excellent performance against their more experienced opponents from Africa. In fact, it was the US team that took the lead in the game. A penalty corner just in the dying seconds of the first quarter saw Aki Kaeppeler getting the ball in the net with a neat flick.

It was in the middle of the second half that South Africans got the equaliser. They too got their goal through a penalty corner. In the 42nd minute, Austin Smith made no mistake with a penalty corner conversion. Once at level, the Africans mounted more pressure on the Americans.

Though the US team continued to defend and attack well, it succumbed to pressure of the Africans in the final minute when Nicholas Spooner surprised the American defence with a neat deflection to clinch the match, a berth in the final as well as in the Olympic Qualifier.

The Poles created the first scoring opportunity by their top goalscorer, Mateusz Hulboj, whose powerful shot from the left side was cleared by Russian goalkeeper Marat Gafarov.

The Russians reacted and Marat Khairullin created two scoring opportunities but could not find the target. The Russians substantially increased the pressure towards the end of the first quarter and had some really good chances but could not convert any of them.

However, Pavel Golubev, outstanding throughout the tournament, found the key early in the second quarter to open the scoring and give his team a deserved lead. Russia soon doubled their advantage with a magnificent combination between Dmitriy Laptev and Sergey Lepeshkin, who hit the ball over the goal-line.

However, Pavel Golubev, outstanding throughout the tournament, found the key early in the second quarter to open the scoring and give his team a deserved lead. Russia soon doubled their advantage with a magnificent combination between Dmitriy Laptev and Sergey Lepeshkin, who hit the ball over the goal-line.

The Russians then missed several chances to take a 3-0 lead, and it was Poland who found the goal net with a penalty corner from Michal Kasprzyk shortly before the end of the first half.

Poland started the second half with different intentions and Maciej Janiszewski was very close to finding the equaliser but Marat Gafarov was on hand to make another great save.

And on a counter-attack, Georgii Arusiia made a fine cross for his teammate Marat Khairullin – later elected Man of the Match - who could not let such a chance go away. Shortly after, Poland’s goalkeeper Mateusz Popiolkowski prevented Russia from taking a greater lead by clearing an attempt from Mikhail Proskuriakov.

In the final quarter, Poland were determined to come back in this game. Jacek Kurowski was not far from adding his name onto the scoresheet but it was eventually Mikolaj Gumny who scored his team’s second goal, five minutes before the end. Despite their efforts, the Poles could not add a further goal to their tally.

Russia’s Pavel Golubev: “We take a lot of experience from this tournament, but not everything went the way we were expecting. Next time we will be better. We will prepare more and more, hopefully play more friendly matches against top-class teams and our youngsters will be better and more confident. As everyone saw, we had a really bad finishing during this tournament. This is our main problem at the moment.”

Poland’s Maciej Janiszewski: “We take very good lessons from this tournament. We need to work harder, prepare more, have more trainings, more games and more physical training, as well. As we could see, we had energy in the first half but most of the time we lost that energy in the second half and we lost the game.”