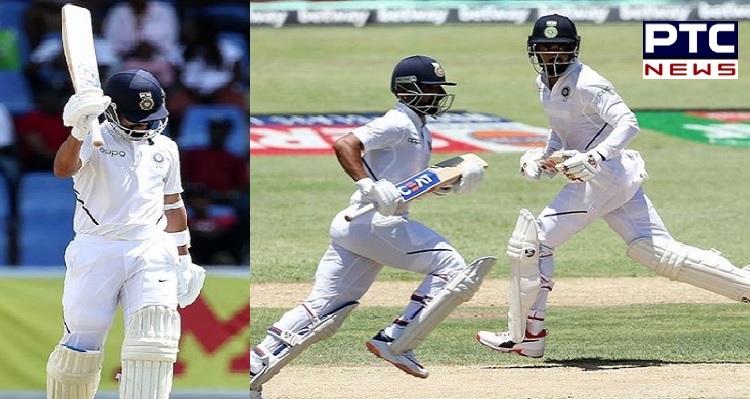 India vs West Indies, 1st Test: As the wickets were falling like cards, Indian Opener KL Rahul and the middle-order batsman Ajinkya Rahane brought the team back on the track. India scored 203/6 on Day 1, where Mayank Agarwal, Cheteshwar Pujara and Virat Kohli, went to the pavilion on a single digit.

Mayank scored 5 runs, while, Pujara and Kohli managed to score just 2 and 9, respectively. Afterward, KL Rahul and Ajinkya Rahane took the command in the first session, but in the second session, KL Rahul got edged and went back to the pavilion.

Likewise, after the wicket of Rahul, Rahane too was dropped, when he was playing on 40. It was Miguel Cummins who fumbled which led to the half-century of Right-handed batsman Rahane.

Not only Rahane-Rahul but Hanuma Vihari too did his job pretty well. Vihari scored 32 runs off 56 balls but gave full support to Rahane. Vihari along with Rahane blossomed as both of them put 82 runs for the fifth wicket. However, Kemar Roach dismissed Vihari as his third wicket. Meanwhile, Rishabh Pant who was struggling in the start began playing on the rise later. Now, its Pant and Jadeja on the crease, who will kick-off the Day 2.