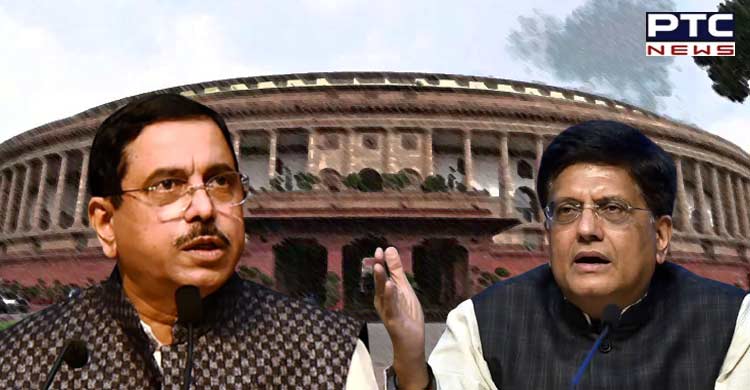 New Delhi, August 1: After witnessing two repeated adjournments in both Lok Sabha and Rajya Sabha over ruckus created by Opposition leaders on various issues, Union ministers Piyush Goyal and Pralhad Joshi on Monday voiced their concerns over Parliament not being allowed to function normally.

Addressing the media at the Parliament premises on Monday, Piyush Goyal stated, "Centre was ready from the first day to discuss about inflation. However, the Opposition wasn't allowing the House (Lok Sabha) to function normally. Finance Minister Nirmala Sitharaman had Covid-19. Knowing that she has just recovered, we are appealing to them for the House to function normally."

Goyal further added that the Opposition is not letting the House run and is running away from discussing other issues.

"We already decided that the issue of price rise will be discussed on Monday in Lok Sabha and on Tuesday in Rajya Sabha. Despite that, the House wasn't allowed to run. They're running away from discussing the issue," he stated.

Goyal further added, "Either Opposition MPs should express regret about whatever they have done or their leaders should ensure that they won't bring placards which are against the rules. In that case, the government is ready to move the motion to revoke the suspension of MPs."

Pralhad Joshi also expressed his concerns and objected to protesting with placards in the Parliament.

"We have many bills to pass but unfortunately, the House is getting adjourned. If the Leader of Congress Parliamentary Party gives assurance in the house that MPs will not come with placards, then, we are ready to withdraw the suspension," Joshi said.

"In spite of that, the Opposition is not cooperating, which means they are running away from the discussion of price rise. If the Opposition is really interested, they should allow the House to function normally," he added.

For the second time on Monday, Lok Sabha and Rajya Sabha were adjourned until 2 PM following a commotion caused by opposition leaders over a number of issues.

After opposition parties urged that the suspension of four Congress MPs be lifted, the Lower House was adjourned. The opposition continued sloganeering in Rajya Sabha while Congress leader Mallikarjun Kharge demanded a discussion over price rise. Following this, Bhubaneswar Kalita - presiding in the Chair said that the matter would be taken up on Tuesday.