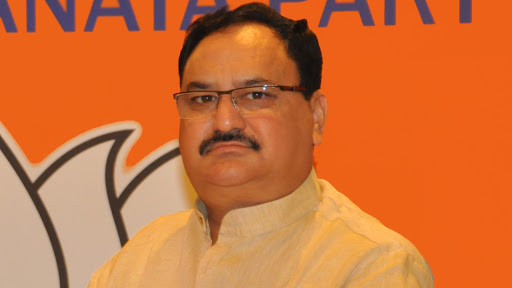 Bharatiya Janata Party (BJP) Chief Jagat Prakash Nadda has written a letter to Punjab Chief Minister Captain Amarinder Singh about the ongoing protests in the state against the farm last passed by Parliament.

Nadda wrote in the letter that he has held Amarinder government for the situation in the case and claimed it is not doing anything to control the protests.

“Your government added fuel to the fire by openly declaring that you will not lodge any FIR against the agitators, even if they indulge in road dharnas, Railway Tracks blocking etc.,” he added.

The farmers have been protesting against the farm laws in Punjab since September 24 when they started blocking railway tracks and stations demanding repeal of the three agriculture related bills.

The railways said on Wednesday that it has suffered losses to the tune of Rs 1,200 crore as protests on train tracks continued at 32 places across Punjab.

According to the data, over 2,225 freight rakes carrying vital commodities could not be operated till date due to the blockades caused by the protesters. Around 1,350 trains have been forced to be cancelled or diverted, it said.

Nadda lashed out at Singh for allowing these protests. “Captain Amarinder Singh Ji, as the chief minister of the state, you would appreciate that no one can be allowed to block roads, railway tracks in any agitation and if any agitation has to be carried out, it has to be at places other than the roads, railway tracks, railway stations. This has been reiterated by the Hon’ble Supreme Court in 2009,” he said in the letter.

“However, I am pained to say that you, your party and your government in Punjab have shown little respect and regard for the directions of the Supreme Court and openly encouraged blockade of roads, railway tracks and railway stations,” the BJP chief added.

“The farmers of Punjab have always been a pride of the nation and it is for this reason that the central government accords the highest priority in matters of MSP procurement to the state,” Nadda added.

He also reminded Singh that his Congress party had promised about enacting such laws in its election manifesto.

The chief minister staged a dharna (sit-in protest) against the Centre’s new farm legislation and accused the BJP-led government of meting out “step-motherly” treatment towards the state in Delhi today.