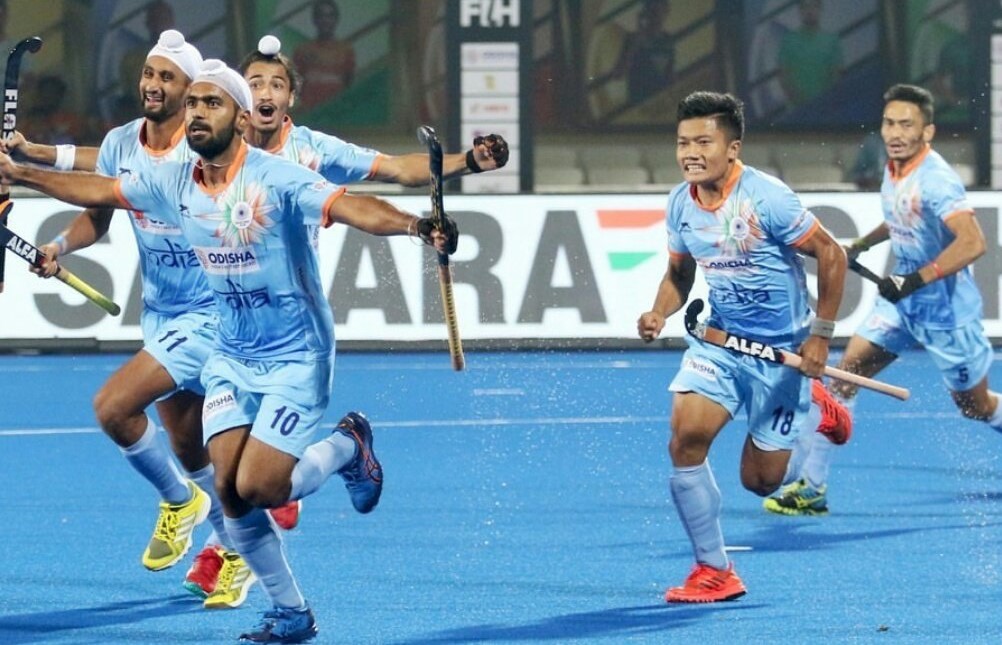 India hit its brightest patch in the fourth and final quarter to crush Canada  5-1  to top pool C and qualify directly for the quarter finals of the Odisha Hockey Men’s World Cup at Kalinga Stadium in Bhubaneswar on Saturday. It has been one of India’s biggest win over Canada in recent times. Canada now joins Belgium in playing crossovers while South Africa gets eliminated.

India needed a win by a goal to top the pool. It had to wait till the start of the fourth and the final quarter. Finally an Indian blitzkrieg hit Canada.  Two goals within first two minutes had sent the home crowd roaring with excitement. It was Chinglensana who drew the first blood with an angular rasping drive that beat Canadian custodian all ends up. A minute later it was Lalit Upadhyay who found the target from the middle of the circle with another angular shot.

To cap the local excitement, Amit Rohidas, a local, surprised the Canadian defence with a direct hit from the fourth penalty corner to make it 4-1 for India. Before the cheers of the fourth goal had died down, Lalit Upadhyay, scored his second goal to make it 5-1.

With one of the best goalkeepers, David Carter (he did not play today), in its side, Canada had not conceded even a single penalty corner in this tournament till this final pool C game. Harmanpreet not only scored with a low flick on the right side of Antony Kindler but also gave home team lead in the 12th minute.

Canada, however, had packed some surprises for the home team. In the  39th minute when Floris van Son was put through into Indian striking circle, he had all the time to put the ball home. The equalizer shell shocked the strong home crowd.

India has an impressive record against Canada. Of 14 games played previously between the two countries, India won 10 lost three and one ended in a draw. India scored 41 goals and conceded 24. Of late Canada has been performing well against India. It held India to a 2-2 draw in Rio Olympic Games.

Man of the match: Lalit Upadhyay