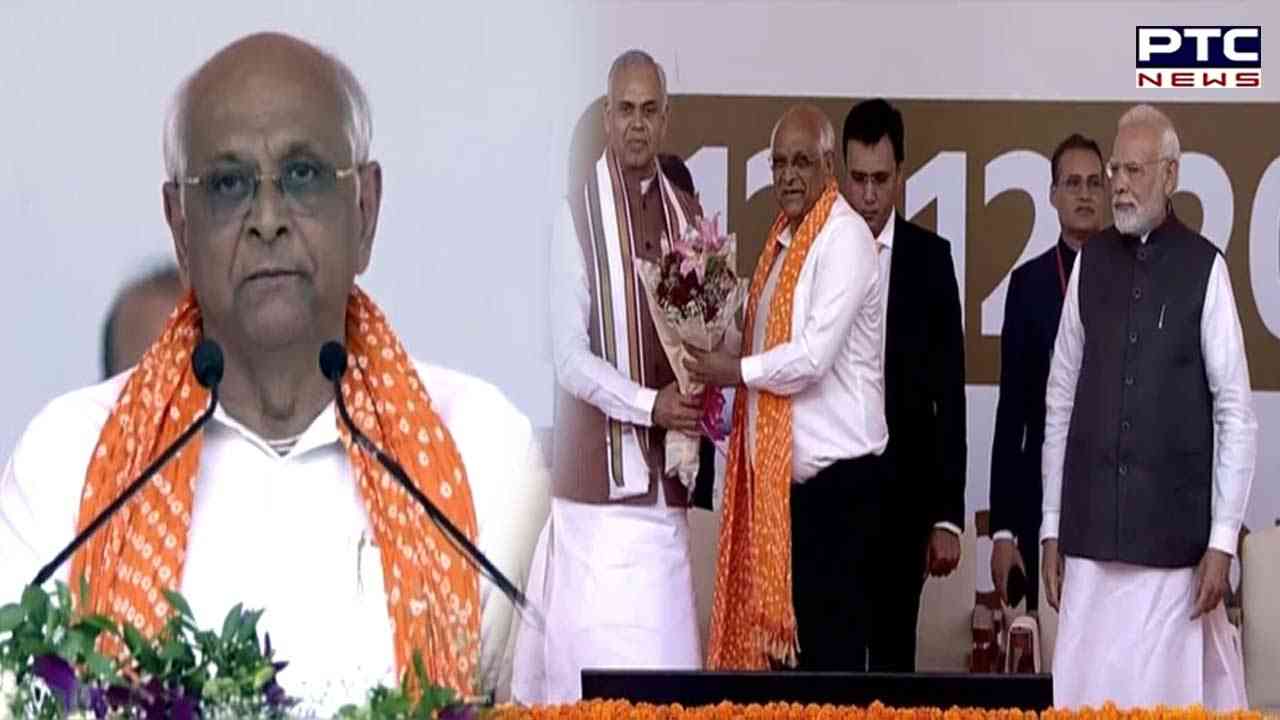 Gandhinagar, December 12: Bharatiya Janata Party (BJP) leader Bhupendra Patel on Monday took oath as the 18th Chief Minister of Gujarat. The oath was administered by Governor Acharya Devvrat at the helipad ground inside the new secretariat complex in Gandhinagar this afternoon.

Bhupendra Patel took the oath for the second straight term as the Chief Minister.

BJP swept the Gujarat Assembly election winning a whopping 156 seats, which is the highest number of seats any party has won after the formation of the state in the year 1960.

Patel was sworn in as the 17th Chief Minister of Gujarat on September 13, 2021. He was first elected as BJP legislative party leader on September 12, 2021. He began his political journey as a member in Memnagar municipality and got elected as MLA from Ghatlodia constituency (Ahmedabad) in the 2017 Gujarat assembly elections.

Breaking his own record, Patel once again won from Ghatlodia constituency by a staggering margin of 1,91,000 votes in the 2022 election.

This overwhelming majority of the BJP in Gujarat depicts the absolute faith of the people in Patel's leadership.

In 2015, he was appointed as the chairman of the Ahmedabad Urban Development Authority (AUDA). In 2017, Patel became a Member of the Legislative Assembly (MLA) for the first time, by winning the election from Ghatlodia constituency with a wide margin of 1,17,000 votes.

Born on July 15, 1962, in Ahmedabad, Patel holds a Diploma in Civil Engineering from Government Polytechnic, Ahmedabad. He is a member of the Rashtriya Swayamsevak Sangh (RSS). He is also an active member of Pandit Deendayal Library managed by RSS at Memnagar.

The BJP created history in Gujarat with a landslide victory in the 2022 election and its 7th consecutive win. It is the party's largest win in Gujarat since the state's formation in 1960. It is an important win for the BJP.

Notably, there has always been a strong contest between the BJP and Congress in Gujarat, but this time around, Aam Aadmi Party's (AAP) entry made this election an interesting one. AAP leader Arvind Kejriwal tried hard to woo the people of Gujarat with the promises of providing free electricity and water, Rs 1,000 per month for women and a loan waiver for farmers. On the other hand, Congress also tried to attract voters with all kinds of sops.

The BJP bagged 156 seats in the 182-member Assembly, its highest-ever poll tally in the state. The opposition Congress could manage only 17 seats while Arvind Kejriwal's Aam Aadmi Party had to be content with just 5 seats.

Three seats went to Independent candidates while the Samajwadi Party (SP) won a lone seat in the state.

The BJP, which has won its seventh straight election in Gujarat, not only improved its own best record of 127 seats in 2002-- the first election with Narendra Modi as Chief Minister -- but the Congress' tally of 149 seats in 1985.