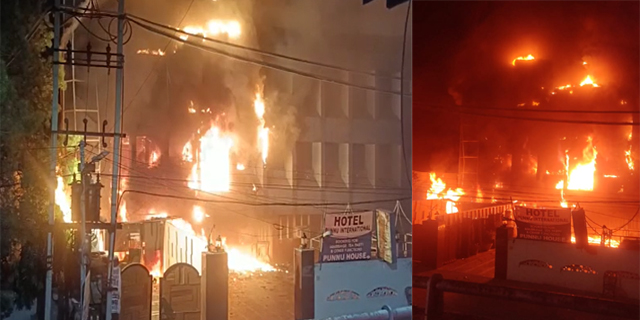 A sudden fire broke out at Hotel Pannu International in Punjab's Amritsar district on Saturday night. The fire spread within a few minutes more and engulfed the entire hotel. Fire brigade vehicles reached the spot and the fire was brought under control after about two and a half hours. During this, three people were also rescued from the flames.

According to the information received, around 11 o'clock in the night, there was a sudden fire at Pannu International located on Court Road, Amritsar. The fire brigade was called immediately, but before the fire brigade vehicles arrived, more than half the hotel was engulfed in flames.

The fire spread rapidly due to excessive wood work and flammable material . Three people were trapped inside the fire, which were rescued by the fire brigade personnel. Around 8 vehicles took to control the fire.

Fortunately no one was hurt, but the cause of the fire in the hotel is yet to be ascertained.