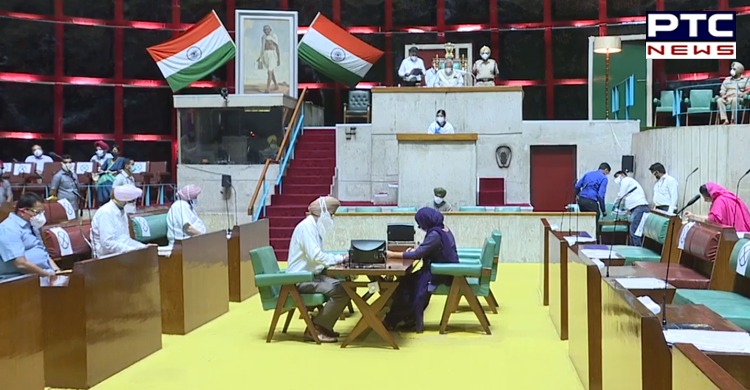 The Shiromani Akali Dal (SAD) today described the one hour Vidhan Sabha session as a black day for democracy even as it castigated chief minister Capt Amarinder Singh for running away from discussing the burning issues of the State and indulging in blatant lies and deceit again to be-fool the people.

Terming the chief minister’s behavior as “shameful” and unbecoming of his office, senior SAD leader Bikram Singh Majithia said that it was shocking that Capt Amarinder Singh even lied in the Vidhan Sabha that the SAD did not attend the session when it was his government which had kept the opposition out of the assembly. He said that,”Capt Amarinder Singh is known to have even taken a false oath on the holy Gutka Sahab. Today he indulged in blatant lying by concealing the fact that it was on record that the chief minister has asked opposition legislators who had made contact with those testing COVID-19 positive not to come to the Vidhan Sabha. The Speaker also issued a letter to the same effect which is also on record”.

He also said while the SAD acted responsibly many others including the AAP and Congress legislators did not with one Congress MLA Nirmal Singh Shatrana who attended the session testing positive later.

Mr. Bikram Majithia said this was not all. “The police was posted outside the residences of SAD MLAs to thwart them from coming out to attend the session. These actions speak about the intentions of the Congress government and the chief minister who is intentionally trying to defame the SAD legislators instead of appreciating them for behaving responsibly”.

The SAD leader said instead of indulging in diversionary tactics and holding a discussion on such an important issue as central ordinances on agriculture for less than 30 minutes with the sole purpose of playing politics, the chief minister should have given the opposition time to discuss the important issue.
“Similarly no time was kept to discuss any pressing issue of the State be it the Rs. 5,600 crore liquor scam and subsequent hooch tragedy, the loot of the sand mafia, embezzlement of MGNREGA funds, loot of Rs. 69 crore central funds meant for SC students by minister Sadhu Singh Dharamsot, timely salaries to doctors and health workers, removing discrimination against government employees and ensuring relief for private school children”.

The SAD leader said if the chief minister was really serious about discussing the central ordinances on agriculture he should first dismiss the Chairman of the party’s election manifesto committee which had promised it would amend the APMC Act to set up private mandis in Punjab.

“It should also abolish the amendments made in the APMC Act in 2017 which now allow creation of private yards, e-trading and direct marketing of food grains. It should also dismantle the Montek Singh Ahluwalia committee which has appreciated the government for amending the APMC Act”.

He said all this actually made it clear that the chief minister was only indulging in double speak on the central ordinances.

Stating that the SAD legislators had acted as per their conscience as a responsible public representatives, Mr Bikram Majithia asked the Congress government to reconvene the Vidhan Sabha next month to discuss all pressing cases.

“The present Vidhan Sabha meeting does not have any relevance as it witnessed less than fifty per cent attendance. The normal procedure was not followed with zero hour and call attention motions being suspended. If the Congress government and chief minister Capt. Amarinder Singh really want to discuss the issues of the people they should reconvene the assembly next month or else it will be taken that the government deliberately held a one hour session on the pretext of COVID-19 pandemic to deny people an opportunity to raise their voice in the temple of democracy”.