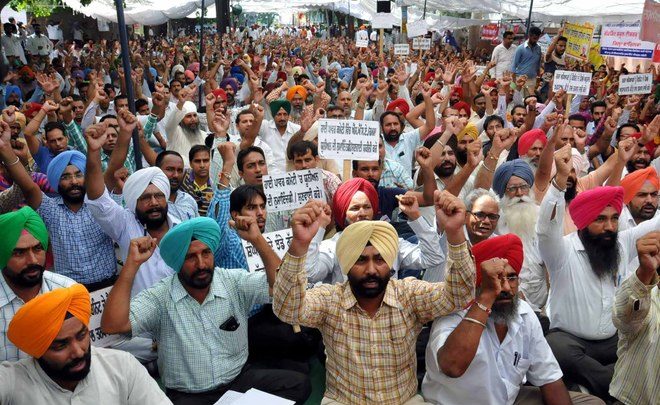 The Sanjha Adhyapak Morcha Punjab, a teachers’ union, will hold a vehicle rally in Patiala on Sunday. They were failed to get an appointment with the Chief Minister Capt Amarinder Singh, after which frustrated teachers have decided to stage a protest in Patiala for their long-pending demand of regularisation of their services.

According to the sources, nearly 2000 teachers from 26 teachers associations are likely to participate in this state-level protest against the state government. They would march towards the Chief Minister Capt Amarinder Singh residence in the morning.

Vikram Dev Singh, convenor, said, “First we were promised that our services would be regularised after completing a three-year contract. But now when we have completed the stipulated time, we are told to do the same again. This is the injustice meted out to us.”

District Convenor Ranjit Mann said, “If our demands are not met, we will not hesitate even to get ourselves arrested.”

Davinder Singh Poonia, State convenor, said, “We had a meeting with the district administration in the evening. In the meeting, they did not give us any written assurance of a meeting with the CM, therefore, we will protest on Sunday.”

Proper arrangement for security has been made for the protest. It is said that nearly 2000 policemen were deployed to maintain peace. Also, the roads leading to the CM’s house were barricaded on Saturday evening. All entry points to the city were being checked. As per police officials, additional security has been called in Patiala. As per officials, as many as 1,000 additional police personnel, including women police force, has reached Patiala in order to avoid any untoward incident.