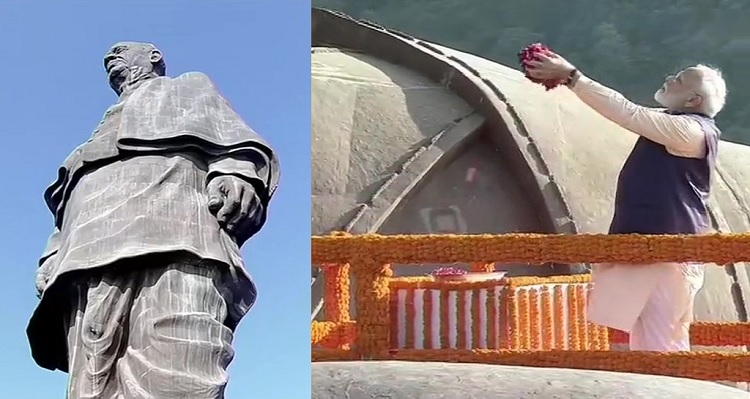 Sardar Vallabhbhai Patel Birth Anniversary: Prime Minister Narendra Modi paid tribute to the Iron Man of India at ‘Statue of Unity’ in Gujarat, on Thursday. As a tribute, PM Modi shared a video on twitter, with a caption, "Tributes to the great Sardar Patel on his Jayanti. His contribution to our nation is monumental." Celebrations took place at Statue of Unity in Kevadia on the 144th birth anniversary of Sardar Vallabhbhai Patel.

Likewise, PM Modi administered a unity pledge in Kevadia on the birth anniversary of Sardar Patel. Meanwhile, PM Modi said, "'Run for Unity' program is being held in different cities and villages across the country today. I thank every citizen for participating in this program. India is known for 'unity in diversity’; it is our pride and our identity."

"I dedicate the August 5 decision of abrogation of Article 370 to Sardar Vallabhai Patel on his birthday today. We are lucky that we could fulfill his incomplete dreams. Ladakh, Jammu and Kashmir are now marching towards development and prosperity," he said. "Jammu and Kashmir was the only state with Article 370, the only state where terrorism killed more than 40k people in the past decades. We were divided by a wall. But, Sardar Patel's dream is now fulfilled, the wall has been demolished by us," he added.

Meanwhile, 'Run For Unity' event is taking place across the country to mark the 144th birth anniversary of Sardar Vallabhbhai Patel.