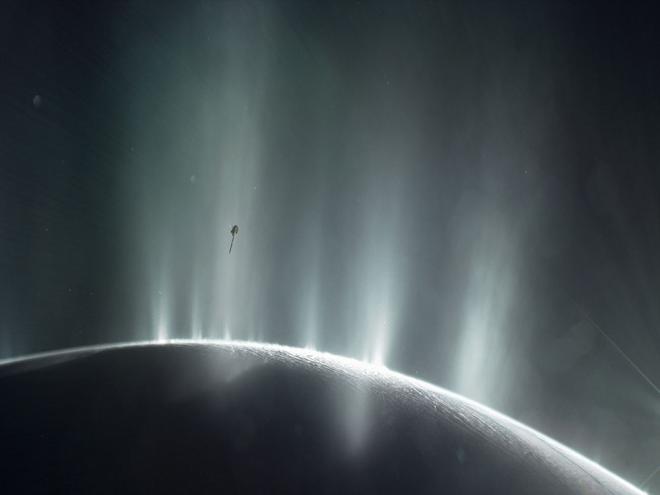 Washington: Saturn's icy moon Enceladus may contain a form of chemical energy that life can feed on, according to a latest NASA study that provides new insights into the 'ocean worlds' in our solar system. NASA's Cassini mission to Saturn and Hubble Space Telescope are providing new details about icy, ocean-bearing moons of Jupiter and Saturn.

"This is the closest we've come, so far, to identifying a place with some of the ingredients needed for a habitable environment,” said Thomas Zurbuchen, associate administrator for NASA's Science Mission Directorate in Washington. Cassini scientists announced that a form of chemical energy that life can feed on appears to exist on Enceladus, and Hubble researchers reported additional evidence of plumes erupting from Jupiter's moon Europa.

Hydrogen gas, which could potentially provide a chemical energy source for life, is pouring into the subsurface ocean of Enceladus from hydrothermal activity on the seafloor. The presence of ample hydrogen in the moon's ocean means that microbes - if any exist there - could use it to obtain energy by combining the hydrogen with carbon dioxide dissolved in the water.

This chemical reaction, known as "methanogenesis" because it produces methane as a byproduct, is at the root of the tree of life on Earth, and could even have been critical to the origin of life on our planet. Life as we know it requires three primary ingredients: liquid water; a source of energy for metabolism; and the right chemical ingredients, primarily carbon, hydrogen, nitrogen, oxygen, phosphorus and sulphur.

With this finding, Cassini has shown that Enceladus - a small, icy moon a billion miles farther from the Sun than Earth - has nearly all of these ingredients for habitability. Cassini has not yet shown phosphorus and sulphur are present in the ocean, but scientists suspect them to be, since the rocky core of Enceladus is thought to be chemically similar to meteorites that contain the two elements.

"Confirmation that the chemical energy for life exists within the ocean of a small moon of Saturn is an important milestone in our search for habitable worlds beyond Earth," said Linda Spilker, Cassini project scientist at NASA's Jet Propulsion Laboratory (JPL). Cassini detected the hydrogen in the plume of gas and icy material spraying from Enceladus during its last, and deepest, dive through the plume on October 28, 2015. The spacecraft also sampled the plume's composition during flybys earlier in the mission.

From these observations scientists have determined that nearly 98 per cent of the gas in the plume is water, about 1 per cent is hydrogen and the rest is a mixture of other molecules including carbon dioxide, methane and ammonia. "Although we can't detect life, we've found that there's a food source there for it. It would be like a candy store for microbes," said Hunter Waite, lead author of the Cassini study.

In the Hubble Space Telescope observations of Europa from 2016 a probable plume of material was seen erupting from the moon's surface at the same location where Hubble saw evidence of a plume in 2014. These images bolster evidence that the Europa plumes could be a real phenomenon, flaring up intermittently in the same region on the moon's surface, NASA said.

The newly imaged plume rises about 100 kilometres above Europa's surface, while the one observed in 2014 was estimated to be about 50 kilometres high. Both correspond to the location of an unusually warm region that contains features that appear to be cracks in the moon's icy crust, seen in the late 1990s by NASA's Galileo spacecraft. Researchers speculate that, like Enceladus, this could be evidence of water erupting from the moon's interior.