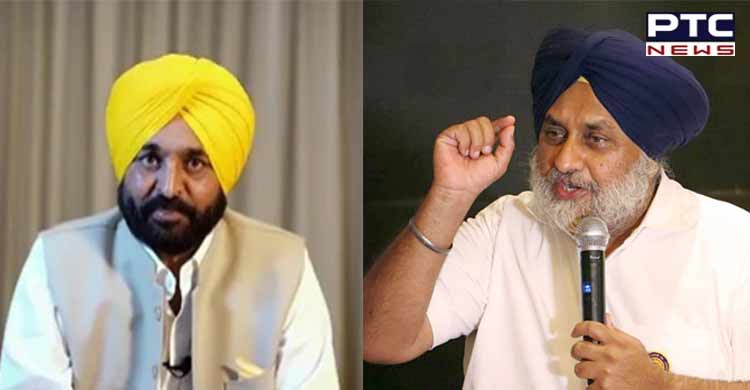 New Delhi, September 19: Shiromani Akali Dal (SAD) president Sukhbir Singh Badal has levelled serious allegations against Punjab Chief Minister Bhagwant Mann and asked him to clarify media reports of him being deplaned from a flight for being intoxicated.

As per reports shared by Badal the flight was delayed for four hours. "Disturbing media reports quoting co-passengers say Punjab Chief Minister Bhagwant Mann was deplaned from a Lufthansa flight as he was too drunk to walk. And it led to a 4-hour flight delay. He missed AAP's national convention. These reports have embarrassed and shamed Punjabis all over the globe," tweeted Badal.

He further slammed the Punjab government over their silence on the issue and sought clarifications on the incident. He also asked AAP leaders including party chief and Delhi Chief Minister Arvind Kejriwal to come clean on the issue.

"There has been a scam in Punjab Excise Policy just like it happened in Delhi. Just like the Delhi LG has ordered an inquiry into the Excise Policy case, we demand a CBI inquiry along the same lines in Punjab," said Badal.

"For the first time, profit in album license has been increased from 5 to 10. So, we have demanded a CBI inquiry," he added.

Taking to Twitter, the SAD chief said that they have demanded CBI and ED probes in the Punjab excise policy.

"Submitted a memorandum to Pb Governor and urged him to order CBI and ED probes in the Rs 500 crore scam committed by the AAP govt in Punjab through its "tailor-made" excise policy framed in line with Delhi policy, which has already been found illegal and case has been registered by CBI," he tweeted.

The Aam Aadmi Party government in Delhi is facing the heat over its now withdrawn excise policy, with the BJP taking on the Kejriwal government and Deputy Chief Minister Manish Sisodia, who heads the excise department.