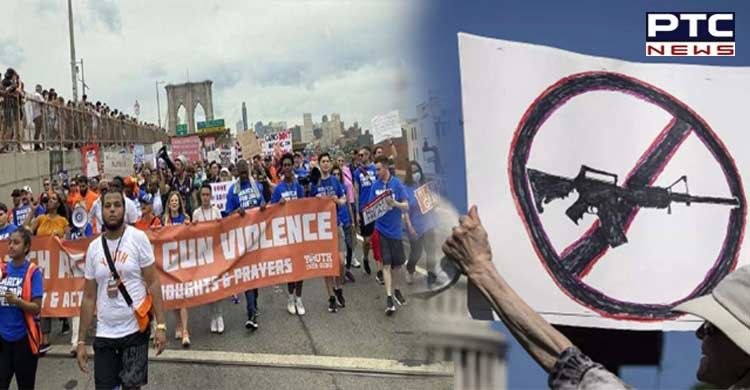 Washington (US), June 13: In response to the mass shooting at Robb Elementary School in Uvalde, Texas, a bipartisan group of 20 senators led by Chris Murphy (Democrat - Connecticut) and John Cornyn (Republican - Texas) announced on Sunday (local time) that they have agreed to "a common-sense proposal" to curb gun violence.

According to The Hill, ten Republicans have signed on to the bipartisan framework, indicating that any legislation based on its principles has a fair chance of garnering 60 votes and overcoming a filibuster on the Senate floor.

US President Joe Biden also hailed the deal and said that it "would be the most significant gun safety legislation to pass Congress in decades," and pledged to sign it.

As per The Hill, the nine-point bipartisan plan would direct federal resources to establish red flag laws to keep guns out of the hands of people deemed dangerous to the community, invest billions of dollars in children and family mental health services, fund school-based mental health services, fund new safety measures at schools and strengthen criminal background check requirements for gun buyers younger than 21.

"Today, we are announcing a common sense, bipartisan proposal to protect America's children, keep our schools safe and reduce the threat of violence across our country," the lawmakers said in a joint statement on Sunday.

"Families are scared, and it is our duty to come together and get something done that will help restore their sense of safety and security in their communities," it added.

The latest proposals include stricter background checks for gun buyers under the age of 21, more funding for states to keep weapons out of the hands of people deemed a threat, and a crackdown on illegal gun sales.

According to The Hill, the statement comes just in time to meet a deadline set by Senate Majority Leader Charles Schumer (D-NY) for bipartisan negotiations.

If Republicans do not agree to something quickly, Schumer has vowed to bring gun-control legislation to the floor for a vote, whether or not it has bipartisan support.

Instead of pointing to mental health concerns as the root of the problem, Republican lawmakers have consistently blocked stricter measures and continue to oppose major changes to gun regulations.