Uttarakhand : 9 killed, 1 rescued as car washed away in Dhela river 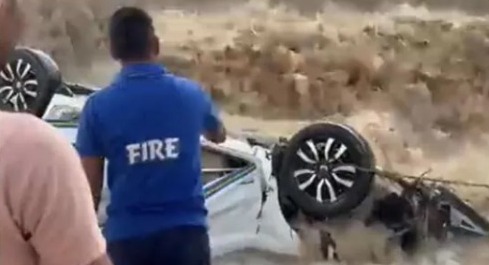 Nainital, July 8: At least nine people were killed and one person was rescued alive after a car in which they were travelling in, was washed away in the Dhela river of Uttarakhand's Ramanagar on Friday morning, police said.

The incident took place at 5 am. Four bodies have been retrieved and five bodies are still trapped in the car amid the heavy flow of water due to heavy rainfall in the state. Efforts are on to remove the bodies of the

"Nine people died, one girl was rescued alive and about 5 bodies are still trapped after a car washed away in the Dhela river of Ramanagar amid the heavy flow of water induced by rains early this morning, Kumaon Range, Deputy Inspector General of Police (DIG) Nilesh Anand Bharan told to ANI.

"Five more people are still trapped in the car. Efforts are being made to rescue them. The car is badly stuck," he informed.

As Uttarakhand is witnessing heavy rainfall, the flow of water in the river is faster than usual, the accident occurred due to ignorance, the DIG said.

On July 4, the Meteorological Department had predicted heavy rain in Uttarakhand for the next four days. An alert of heavy rain was issued in Dehradun, Nainital, Bageshwar, Pithoragarh, Tehri, Pauri, and Champawat.

On Monday heavy rain lashed Dehradun in which several trees were uprooted and vehicles were damaged. The monsoon hit Uttarakhand last week raising concerns over landslides in the hill state.

People have been advised to be alert due to landslides, rock fall, debris on roads, erosion and water flow in river drains through sensitive areas due to heavy rains.