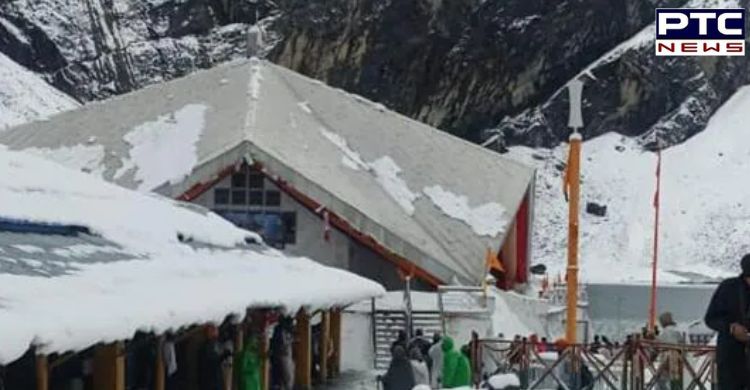 Chamoli (Uttarakhand), October 9: The pilgrimage to the Hemkunt Sahib in Uttarakhand's Chamoli has been halted just a day before the closing of its doors owing to heavy snowfall.

The Chamoli district received fresh snowfall on Sunday, according to Superintendent of Police (SP) Shweta Choubey, with more than 2 feet of snow covering the area.

"More than two feet of snowfall has covered the area so far, due to which the pilgrimage at Govindghat and Ghangariya has stopped," SP Shweta Choubey informed.

The Gurdwara, which is located at an altitude of 15,225 feet, has been visited by nearly 2 lakh devotees since its doors opened on May 22.

Hemkunt Sahib is considered to be the fifth Dham of Uttarakhand.

Every summer, thousands of devotees from all over the world visit Hemkunt Sahib (also known as Hemkund Sahib). The Gurudwara is located next to a lake, and it is said that the 10th Sikh Guru, Gobind Singh, meditated there.

Meanwhile, Darma Valley, Uttarakhand's last outpost near the Chinese border, saw its first snowfall of the season on Tuesday.

It had received roughly one foot of snow in the low-lying areas and more over four feet in the mountains at an altitude of 17,500 feet. In extreme cases, security forces continue to protect the border from the last checkpoints.

More than a foot of snow fell in Dhaka and Bidang Chowki, which are located at an elevation of more than 10,000 feet in Darma Valley.

People have begun harvesting palti, paffar, and other crops in both valleys (Darma and Vyas), and they will arrive in the lower valley in the first week of November.

On October 2, snow fell in the Jyolicang, Nabhidhang, Om Parvat, Adi Kailash, and the famed Panchachuli peaks of the Beas Valley as rain fell in the lower valley.