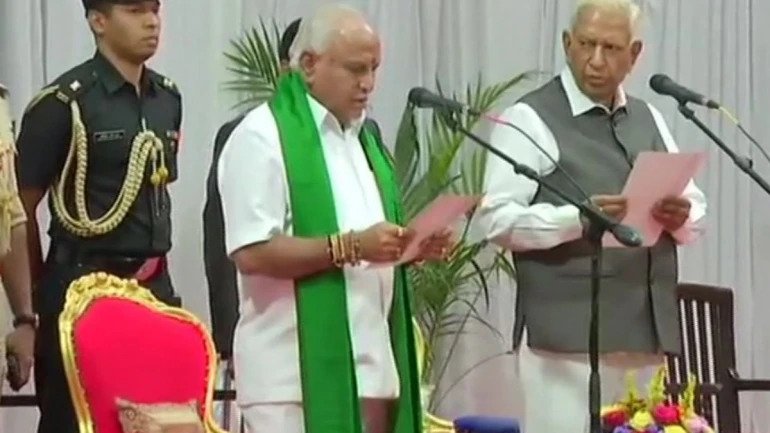 BS Yediyurappa, who earlier spelt his name as BS Yeddyurappa, was sworn in as chief minister of the state for the fourth time on Friday. This comes three days after HD Kumaraswamy government of the Congress-Janata Dal (Secular) coalition failed to win trust vote.

BS Yediyurappa has to prove his government's majority in a week's time. The council of ministers will take oath later as the BJP is said to be still in the process to finalise the names of MLAs who would be part of the Yediyurappa government.

The party failed to secure support from other parties prompting Yediyurappa to resign before voting on the confidence motion. He was the chief minister for just three days.

BS Yediyurappa became Karnataka chief minister for the first time in 2007. The stint lasted only a week with the JDS backtracking on its promise to extending support to the government. His second stint was the longest - three years two months - between May 2008 and July 2011, when he was indicted by the Karnataka Lokayukta in a corruption case forcing him to resign.

His fourth stint has come in the backdrop of a huge defection drama - for which the Congress-JDS coalition blamed Yediyurappa - earlier this month. Eighteen of the MLAs - including two Independent -- withdrew support to the Kumaraswamy government. This brought the Congress-JDS alliance in minority in Karnataka Assembly.

After the fall of Kumaraswamy government, Speakar KR Ramesh Kumar disqualified three rebel Congress MLAs, making them ineligible to become minister in the Yediyurappa government as was widely speculated. Decision on 14 other rebel MLAs is still pending with the Speaker.

At present, the strength of the BJP is 105 and the single largest party in the Assembly of 224 MLAs. It also enjoys the declared support of one Independent MLA. With three disqualified, the total strength has come down to 221. The official majority mark is 112.

If the rebel MLAs stay away from voting, the strength of Karnataka Assembly will be 207. The half-way mark will then be 104. The BJP is comfortably placed.

But if the Congress-JDS leadership is able to convince MLAs to come back to their fold, and vote against the BJP in the floor test, the Karnataka politics will be back to square one. The BJP will have 106 MLAs voting for it when it requires support of 112.

The Congress and the JDS, earlier, criticised Governor Vajubhai Vala's decision to invite BS Yediyurappa for government formation calling the move anti-democratic. The Congress said the BJP does not have majority in Karnataka Assembly.