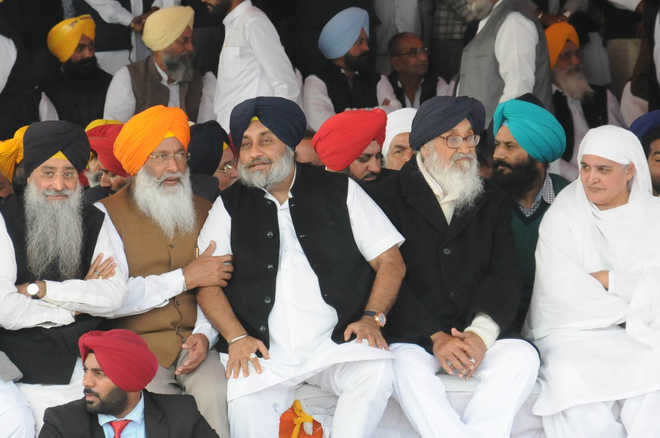 Former  Chief Minister Sardar Parkash Singh Badal today dared the Punjab Chief Minister Captain Amarinder Singh  to “demonstrate the courage to prosecute and  try us in a court of law  if there is any shred of truth in your allegations against us on the sacrilege issue.”

Mr Badal was addressing a mammoth rally organised by the SAD-BJP here this afternoon. He said that Amarinder’s blasphemous tirade against the SAD on the sacrilege issue was merely an attempt to divert people’s attention away from his own grievous and public crime of sacrilege against the sacred Gurbani committed while making false promises to the people while holding the Guru’s word contained in the holy Gutka Sahib. “He knows that he committed a grave sacrilege by telling a lie on oath holding  Gutka Sahib in his hand”.

The former Chief Minister said that the Operation Bluestar was the biggest and the most painful incident of sacrilege in the history of the world.

Mr Badal also lashed out against the Chief Minister Captain Amarinder Singh accusing him of indulging in petty and destructive vendetta politics to divert the people’s attention from the failures of his government on every front including the farmer’s debt waiver, drug eradication, jobs for every youth, raising old age pensions four times and starting free sugar and tea for the poor families,  and so on.

Referring to the incidents of sacrilege of the holy Shri Guru Granth Sahib in the state during the SAD-BJP tenure in Punjab.Mr Badal declared, “ Shri Guru Granth Sahib is dearer to us than our lives. We can sacrifice millions of Badals and and another countless millions of Sukhbir Badals  just to safeguard the honour, the dignity and the glory of sacred Shri Guru Granth Sahib. How can those who rolled tanks into the sacred Harmandar Sahib and destroyed Shri Akal Takhat Sahib even understand the purity and the profound depth of our sentiment and our devotion to Sri Guru Granth Sahib”, said Mr Badal, adding that the Congress party and its government were the enemies of the Sikh quom. “But  If you have the moral and political courage, then come and take us to court on the basis of whatever evidence you can cook against us,” said Mr Badal.

The former Chief Minister said that he and his party had always stood for a fair inquiry into all cases of sacrilege by a sitting judge of her Supreme Court and this was why the SAD had rejected the biased Ranjit Singh Commission. He said retired judge Ranjit Singh was a close relative of AAP leader Sukhpal Khaira an evening-pal of the CM.

Speaking on the occasion, SAD president Sukhbir Singh Badal said Capt Amarinder Singh was  “bujhdil” because he never agreed to protest against oppressive governments. “I remember you ran away from going to jail for the cause of the people”. Telling the chief minister not to even think of comparing himself with Sardar Parkash Singh Badal, the SAD president said “Badal Sahab has spent more time in jail than your tenure in politics”. He also said it was surprising that a “sharabi- Kababi Raja whose character was known to each and every child of Punjab was trying to defame others.

The SAD President also launched a scathing attack on the Congress party as well as CM Capt Amarinder Singh for trying to revive extremism by encouraging the likes of Dhyan Singh Mand and Baljit Singh Daduwal. He said earlier also the Congress party had given birth to terrorism through persons like the late Giani Zail Singh who had encouraged radical elements to show down the Akalis. He said the present Congress government was also doing the same by facilitating the dharna at Bargari and actively consorting with radical elements. He said the collusion was such that Daduwal had been caught meeting the chief minister at his official residence at night. “This self styled bogus Jathedar even lied on the Guru Granth Sahib ji but was exposed when it was revealed that his vehicle and mobile phone entered the CM’s residence. Even cabinet minister Tript Rajinder Bajwa admitted to meeting him”.

Speaking about Pradesh Congress president Sunil Jakhar, the SAD president said today the SAD flag was flying high not only in Jakhar’s village Panjkosi but also Abohar town. He said this was the same Jakhar whose father Balram Jakhar as Lok Sabha Speaker had said “if we have to kill two crore Sikhs for the sake of the country’s integrity we will kill them “. He said Jakhar was also unleashing a reign of terror by registering false cases against women and even minors. He said just as Jakhar was forcibly parading citizens after ordering they be handcuffed similarly he would also meet the same fate after three years.

Others who spoke on the occasion included Balwinder Singh Bhundur, Bikram Singh Majithia, Manjit Singh GK, Sikander Singh Maluka, Virsa Singh Valtoha, Arun Narang.They stressed on the fact that the Congress party was working in league with radical forces to weaken Sikh institutions like Sri Akal Takth and Shiromani Gurdwara Parbandhak Committee as well as the SAD. They asserted that 72 cases of sacrilege had occurred during Congress tenure but no concrete action had been taken to stop them. They also noted that the Congress continued to shelter Jagdish Tytler and Sajjan Kumar, the perpetrators of the 1984 massacre.