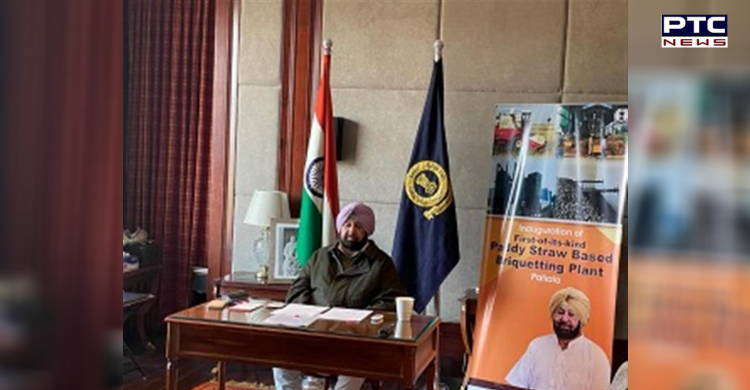 Calling it an overdue initiative, the Chief Minister said the new technology will not only help check environmental pollution through gainful utilization of paddy straw in the state but will also enable farmers, especially small farmers, earn extra income from sale of paddy stubble.

Confident that more such plants would come up in the future to ease Punjab’s stubble burning problem, he said the low calorific value of 3500 for briquettes (as compared with 7000 for coal) is amply balanced out economically since coal costs Rs 10000 per ton as against Rs 4500 per ton for briquette. Further, with oil becoming expensive, this is also a more viable source of energy, he added.

The plant has been set up at village Kulburchan in Patiala district, at a capital cost of Rs 5.50 crore, by Punjab State Council for Science & Technology (PSCST) in collaboration with Private Partner M/s. Punjab Renewable Energy Systems Pvt. Ltd, with the support of Ministry of Environment, Forest & Climate Change, Govt. of India under the Climate Change Action Programme.

Lauding the efforts of scientists, farmers and farm equipment manufacturers to make India self-reliant in food production, the Chief Minister said that with this new technological intervention, paddy straw from around 40 villages in the plants’ vicinity will be converted to green fuel. Not only will this help in checking environmental pollution, which has become more dangerous amid the COVID pandemic, it will also the resultant health hazards, he added. The plant will utilize 45000 ton paddy straw and would help replace fossil fuel in industries, thus resulting in carbon footprint reduction to the tune of 78,000 ton CO2.

Speaking on the occasion, Chief Secretary Vini Mahajan welcomed the establishment of the plant as an important initiative as part of the various measures being taken by the state government to check the menace of paddy burning in the field.

She expressed the confidence that successful commercialization of such technological interventions will pave the way for their replication not only across the State but the entire country.

A predominantly agricultural state, Punjab generates huge quantities of agri-residue, and while wheat straw gets consumed as fodder etc., the management of paddy straw is major challenge for the state, said the Chief Secretary.

Besides initiating the State Action Plan for paddy straw management, Punjab had been able to divert about 3 lac hectare of area from paddy to other alternative crops such as cotton, maize etc, said Mahajan, adding that the state is also promoting in-situ management of paddy straw through distribution of crop residue management machines to the farmers. More than 75,000 machines have been distributed so far, she disclosed, adding that 18,878 Custom Hiring Centres have also been established for distributing the crop residue management machinery.

Mahajan disclosed that 11 biomass based Power Plants have already been set up in the State, and a number of units for ex-situ manage of paddy straw are under installation. The first bio-CNG plant of about 33 ton per day capacity would be operational in March, 2021, she added.

Meanwhile, Executive Director, PSCST, Dr. Jatinder Kaur Arora, in her brief presentation, spoke about the salient features of the project. She shared that extensive R&D was carried out to stabilize machinery, the process of briquette manufacturing from paddy straw, as well as combustion behavior of briquettes for use as fuel in industry. She said that the Punjab Pollution Control Board and NABARD had supported these activities in the initial stages of the project.

She further said that with support of Department of Science & Technology, Govt. of India, the Council was also setting up a pilot unit within the Briquetting Plant site at Patiala, which can be used by R&D institutions to carry out research for further increasing the life cycle of wearable components of paddy straw processing machinery.

Speaking on the occasion, MD, Punjab Renewable Energy Systems Private Ltd (PRESPL) Lt. Col Manish Ahuja (Retd), who is the private partner for the project, said that key management personnel of PRESPL were all ex- Defence forces. PRESPL plans to invest Rs. 5000 million in cleaner technologies in coming 4-5 years across the state.

Prominent amongst others who were present on the occasion included Secretary, Science, Technology & Environment, Punjab Rahul Tiwari besides Industry Captains and senior officers from Central and State Government.