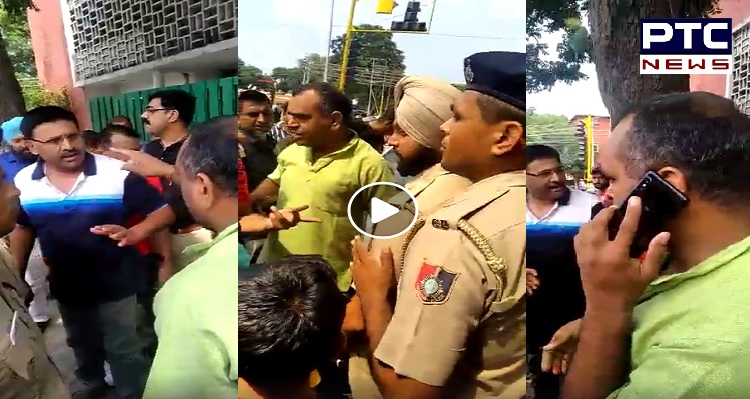 A high-voltage drama witnessed near the Kiran Cinema light point in Sector 22 in Chandigarh on Saturday, when an argument took place in between traffic cop and a biker over the violation of pillion rider without helmet. Meanwhile, a video is getting viral on social media, where a DSP (Traffic) Sukhwinder Pal Singh Sodhi was filmed while he heated exchange with Shivnath, 32, of Sarangpur village, a nursing officer at the PGI.

As per reports, Shivnath was going to attend a parent-teacher meeting with two children and wife on a motorcycle. He claimed that he was physically assaulted on the neck and hands by the DSP. The DSP said that the incident took place at around 11:15 am. He said that the driver was wearing a helmet, while his wife and two children, aged 4 and 10, were riding pillion, and were not wearing the helmet. The DSP claimed that he asked the man to buy helmets for his wife and children as their safety is equally important.

To this, Shivnath replied that he has no money to purchase helmets. Likewise, Sondhi said when he was asked to show the documents of the bike, he refused. He also said, that he was in car and “the man held my collar and hence my gunman had to intervene to keep him away”. Giving clarification of the injury that the man got during the incident, he said, the man opened to the door of his car and suffered injury on nose.

While, the PGI Nurses Welfare Association has alleged that the DSP was trying to jump the lights but Shivnath came in his way. Meanwhile, a complaint has been lodged against both the DSP and the man at Sector 17 police stations. Shivnath went for a medical examination at the GMSH in Sector 16, Chandigarh; however, no FIR has been registered yet.