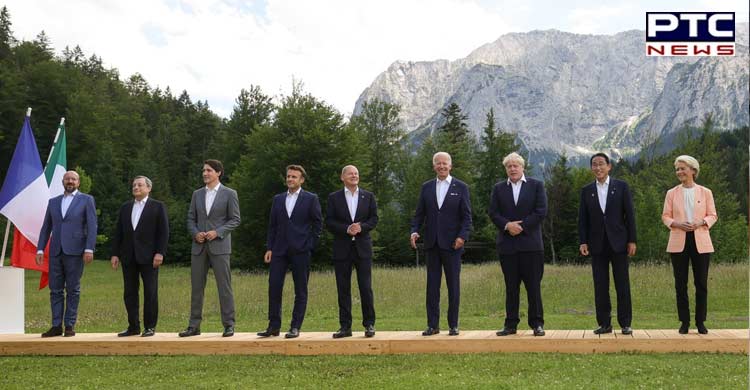 Schloss Elmau (Germany), June 27: The Group of Seven (G7) leaders on Monday announced that they intend to continue to impose individual sanctions against Russia amid a "devastating war" with far-reaching consequences well beyond Europe.

Condemning unprovoked and unjustifiable war, the leaders pledged USD 29.5 billion worth of support to conflict-ridden Ukraine to help the country close its financing gap and continue ensuring the delivery of basic services to the people.

"We remain appalled by and continue to condemn the brutal, unprovoked, unjustifiable and illegal war of aggression against Ukraine by Russia and aided by Belarus. We condemn and will not recognise Russia's continued attempts to redraw borders by force. This devastating war has produced dramatic consequences far beyond Europe," the leaders said in a joint statement on Monday.

"We will continue our targeted use of coordinated sanctions for as long as necessary, acting in unison at every stage. Our use of sanctions is in defence of the rules-based international order that Russia has so egregiously violated. To this end, we endorse the annex on Supporting Ukraine Through Responsible Sanctions Against Russia," the leader further added.

The G7 countries have stated that they will restrict Russia from participation in the global markets and reduce its revenues, including gold exports.

"We will continue to explore new ways to isolate Russia from participating in the global market and crack down on evasion. We are determined to reduce Russia's revenues, including from gold. We will also continue to target evasion and backfilling activities. We will further reduce Russia's export revenues by taking appropriate steps to further reduce dependency on Russian energy," the leaders added.

The group also intends to restrict Russia's access to "key industrial inputs, services, and technologies produced by our economies, particularly those supporting Russia's armament industrial base and technology sector."

The leaders also pledged USD 29.5 billion to aid in the delivery of essential services to Ukrainians.