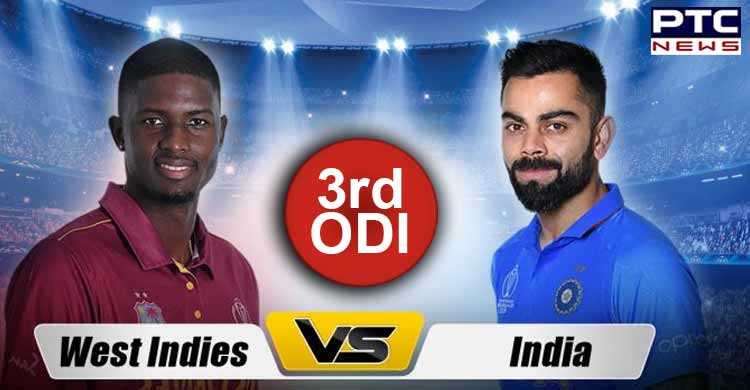 India vs West Indies 3rd ODI: Men in Blue are all set to take on the West Indies to seal the victory in the ODI series. Virat Kohli scored a century in the second ODI, while Chris Gayle flopped, but is there any chance that the monstrous batman will showcase? Team India have already sealed the victory in the T20 series (clean-sweep) and is currently leading in the ODI series by 2-1. Virat Kohli against West Indies in the second ODI created a plethora of records, however, the team won the match by 59 runs with Duckworth–Lewis–Stern method.

Meanwhile, Shikhar Dhawan hasn't hit the straps after coming back from the thumb injury sustained in ICC Cricket World Cup 2019. Still, the team management, won't be making any changes in the side as the team is in the mood to go with the winning XI.

Likewise, Chris Gayle played his 300th ODI and surpassed the tally of Brian Lara to become the highest run-scorer for West Indies in the ODI format. Although, Gayle is not in the form since ODI series, so the question is, will West Indies replace their record holder at the top?

If West Indies replaces Chris Gayle then John Cambell might get a chance ahead of the Test series. Also, if Fabien Allen is fit to play the match, then he is also likely to replace Oshane Thomas. India vs West Indies, 3rd ODI is all set to be played at Queen's Park Oval, Port of Spain, Trinidad. Also, since the pitch is playing slow, the toss is going to be more important and the winning captain will likely go for batting first.