IOA arranges accreditation for Saina's father after her pull-out threat 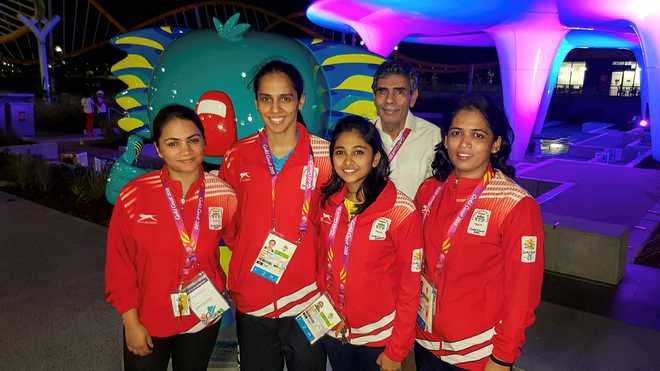 The Indian Olympic Association was today forced to get an official accreditation for Saina Nehwal's father Harvir Singh after the star shuttler in an angry missive had threatened to pull out of the Commonwealth Games.

The 2010 Commonwealth Games gold medallist wrote a letter to a senior IOA office-bearer currently in Gold Coast where she had said that if her father's name is not cleared as "an official", she will not take part in the quadrennial extravaganza.

"I msgd u and tried to call u but u didn't pick up the call but there is so much issue going on with my father...If his accreditation is no (sic) cleared as an official I am not going to play the matches," Saina wrote in her letter addressed to the IOA.

An official in the IOA confirmed that Saina had indeed written a letter.

"It's our duty to help the sportspersons. They should focus on winning medals. Yes, Saina had written to a senior official. But we don't want to make an issue out of it. As it is, we have solved her problem. We wouldn't like to comment on the tone and tenor of the letter," a senior IOA official told PTI today.

India contingent's Chef-de-Mission Vikram Sisodiya said: "I didn't receive any letter from her. She only told me about the problem and asked if anything could be done to sort out the issue."

The Sports Ministry had stated that parents of Saina and Rio Olympics silver medallist P V Sindhu will be travelling to the Gold Coast Games at no costs to the government and were cleared to be part of the Indian contingent.

Saina in a series of tweets earlier expressed her frustration "Surprise to see that when we started from India for Commonwealth Games 2018 my father was confirmed as the team official and I paid the whole amount for that but when we came to the games village ... His name was cut from team official category .. And he can't even stay with me," Saina wrote on her twitter handle.

The IOA on their part however made it clear that they had repeatedly conveyed to Badminton Association of India (BAI) that payment for extra official doesn't include bed in the Games Village.

"Dear @NSaina , Mr. Harvir Singh is an accredited Extra Official! As stated in the CDM Manual of Gold Coast 2018 CWG and repeatedly conveyed to BAI, the payment for accreditation of Extra Official does not include bed in the Games Village."

Along with the tweet, the IOA also attached a picture of an official document which stated "the ETO service charge for an extra Team Official... Does not include a travel grant or bed in the CGV."

Saina's father Harvir Singh and PV Sindhu's mother Vijaya are among the 15 individuals who, despite being cleared to be part of the Indian contingent, are not funded by the government for their travel, stay and other expenses. PTI