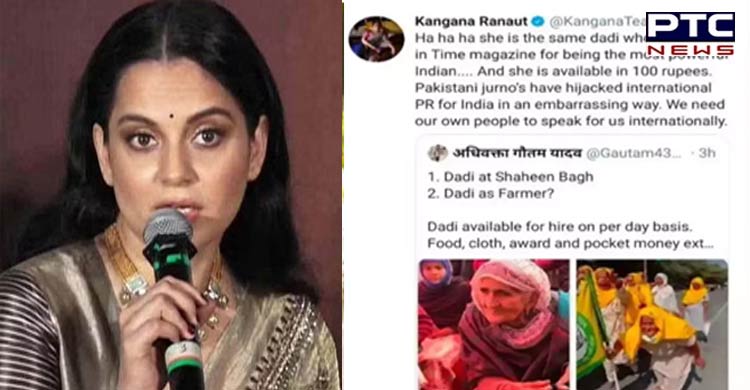 Bollywood actor Kangana Ranaut has filed a petition before the Punjab and Haryana High Court, challenging the criminal defamation proceedings initiated on the complaint of Mahinder Kaur before the Magistrate Court, Bathinda.

The magistrate Court Bathinda on the Complaint of Mahinder Kaur had summoned Ranaut in the month of February.

Kangana Ranaut has sought quashing and setting aside the proceedings initiated by the Magistrate Court Bathinda through her counsel Mr. Abhinav Sood.

After two hours of questioning and discussion the matter has been heard in part and has been kept for further consideration till July 11.

In a complaint filed in the month of January 2021, Mahinder Kaur had alleged that during the farmer protest, Kangana had made a defamatory tweet wherein “false imputations and remarks” were made against her.  In the tweet Mahinder Kaur was compared with the “Dadi” at Shaheen Bagh and it was stated that such protestors could be hired.

Based on the said alleged tweet, the lady farmer, filed a complaint before the Magistrate Court, Bathinda, seeking initiation of criminal proceedings U/s 499/500 for defamation against Kangana Ranaut as she had made false imputations.

The matter is listed today before the court of Hon’ble Justice Meenaksi I. Mehta.

Last year Kangana Ranaut was stopped by protesting farmers, in Punjab’s Ropar district demanding an apology for her alleged remarks on the farmers who had been protesting against the central Agriculture laws last year. The actor alleged she was “attacked” by a mob, who “abused” and “threatened to kill her”.

In November 2021 Kangana Ranaut had filed an FIR against Manpreet Singh and others of Bathinda who had issued her life threat on Facebook.