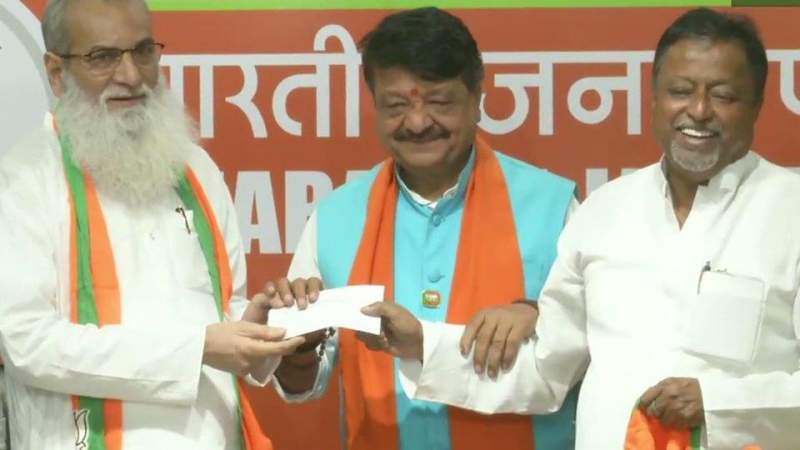 In another jolt to the Trinamool Congress, its MLA Monirul Islam on Wednesday joined the BJP, the third legislator to desert the ruling party in West Bengal after the reverses it suffered in the Lok Sabha polls.

Two TMC legislators and over 50 councillors had joined the BJP on Tuesday.

The BJP projected the decision of TMC's Muslim MLA to join the party as a vindication of Prime Minister Narendra Modi's slogan of "Sabka Saath, Sabka Vikas, Sabka Vishwash" (together with all, development for all, trust of all).

Modi gave the slogan in his first address to MPs of BJP-led NDA after the Lok Sabha poll results were declared. He had asked them to win over the trust of minorities with their work.

Besides Islam, who represents Labpur in Birbhum, a few other TMC leaders, including former MLA Gadhadhar Hazra, also joined the saffron party in the presence of BJP leaders Mukul Roy and Kailash Vijayvargiya.

Roy, a former TMC leader, termed the development as "very significant" and said it vindicates Modi's call to the party to win over the trust of minorities.

Asked about some controversial comments made by Islam earlier in which he allegedly supported violence, Vijarvargiya said the BJP does not believe in any form of violence and there is no place for such views once a leader joins the party.

He also mocked state Chief Minister Mamata Banerjee, who heads the TMC, after she she cancelled her plan to attend Modi's swearing-in, saying she was always looking for an excuse.

Banerjee had objected to the BJP's invitation to family members of many of its workers, who the party claimed were killed in political violence in the state, saying the reason behind their death was not political.

There is no political violence in the state, she said, accusing the BJP of devaluing the swearing-in ceremony.

BJP leaders claimed that more TMC MLAs will join the party in the coming days.

Islam told reporters that minorities are now "supporting" Modi due to his development agenda.

Meanwhile, BJP sources in Kolkata claimed that six more legislators of the Trinamool Congress -- four from south Bengal and two from north Bengal -- are likely to switch sides in a few days along with a few former MPs of the party.

"Six TMC MLAs are likely to join us soon. Many more councillors of various municipalities are also in line. Just wait and watch," a senior BJP leader said on condition of anonymity.

The developments come after the stunning performance of the BJP which raised its tally from two to 18 in Lok Sabha election in the state, only four less than the TMC's 22.

The Trinamool Congress, however, tried to downplay the desertions.

"One suspended MLA of Trinamool joined BJP yesterday. The others were from Congress and CPI(M). The number of councillors is 6. That too they were forced at gunpoint to do so," the TMC claimed in a tweet.

The Trinamool Congress leadership had accused the BJP of indulging in horse-trading, an allegation denied by the BJP.

"The allegation is completely baseless. If someone wants to join BJP and fight against TMC's misrule, how can we stop it. And TMC leaders should be the last person to talk about horse trading, when TMC poached on Congress and CPI(M) MLAs in last few years, what was that? Is it not horse trading?" Mukul Roy had said.

The BJP earlier had only three MLAs in the 294-member West Bengal Assembly.