Jakhar has asked Punjab Minister Tripat Rajinder Singh Bajwa, who was the party observer for the mayor election, and the Amritsar district Congress chief to submit a report within a day or two. Jakhar said that this kind of situation should have been avoided.

He said that he had asked Tripat Rajinder Singh Bajwa and the Amritsar Congress Chief to submit a report on this and ascertained the reasons behind it. He said that it is an embarrassment for the Congress, the 15 municipal councilors, known to be supporters of Punjab Cabinet Minister Navjot Singh Sidhu, boycotted the official programme of the election of the mayor.

They said they stayed away from the programme because Sidhu was not invited to programme. Talking to media in Amritsar, one of the councilors, who won civic polls from the wards falling under the Amritsar (East) Assembly constituency being represented by Sidhu, further said, “The cabinet minister was deliberately ignored.”

“It should have been avoided. We have got a Mayor after several years,” said Jakhar. Punjab Local Bodies Minister Navjot Singh Sidhu, who is an MLA from Amritsar (East), was noticeable by his absence. 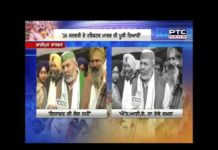