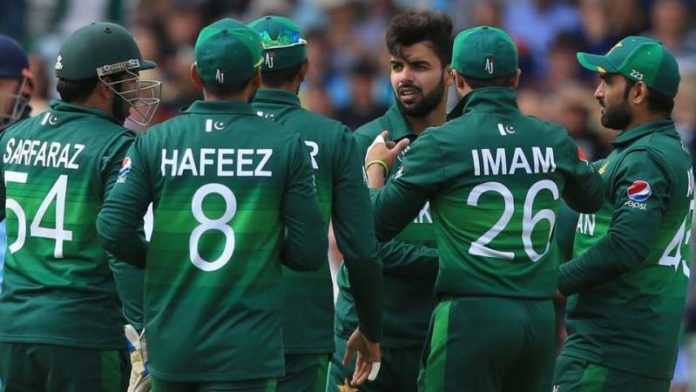 Pakistan stunned tournament favourites England after beating them by 14 runs in a nail-biting thriller in Trent Bridge on Monday to register their first win in the ICC World Cup 2019.

First innings: Even after putting a brilliant show, Mohammad Hafeez missed out on becoming the first century-maker of the World Cup, but a vastly improved batting display from Pakistan saw them make 348 for eight against England at Trent Bridge on Monday. Hafeez made the most of a reprieve when Jason Roy floored a routine chance at mid-off following a skied drive off Adil Rashid, with the batsman on 14. A couple of half-centuries from Babar Azam (63) and the captain, Sarfaraz Ahmed (55), the Pakistan side made a major statement of improvement, who had collapsed to 105 all out in a seven-wicket defeat at the hands of West Indies in their World Cup opener on Friday.

Second innings: Going after a target of 349, England got off to a lost Jason Roy for 8 before steadying the ship. However, they slumped to 128/4 after Ben Stokes was caught behind off Shoaib Malik for 13. Jonny Bairstow (32) and Eoin Morgan (9) were the other batsmen out. However, centuries from Joe Root and Jos Buttler brought them back in the match. However, with the loss of wicket towards the end, England fell short of the target.

Highlights:Wahab Riaz took three wickets while Shadab Khan and Mohammad Amir took two each as Pakistan beat England by 14 runs in their ICC World Cup 2019 encounter. Joe Root and Jos Buttler scored brilliant centuries for the hosts but they were unable to complete the run chase. Earlier, Pakistan scored 96 runs in the last 10 overs as the team posted 348/8 in 50 overs. Hafeez’s innings of 84 runs from 62 balls put Pakistan on course for a big total. This after Fakhar Zaman and Imam-ul-Haq got Pakistan off to a good start with a 82-run partnership. England won the toss and elected to bowl against Pakistan.