Parmish Verma’s Singham Teaser is out, brings back the essence of Bajirao 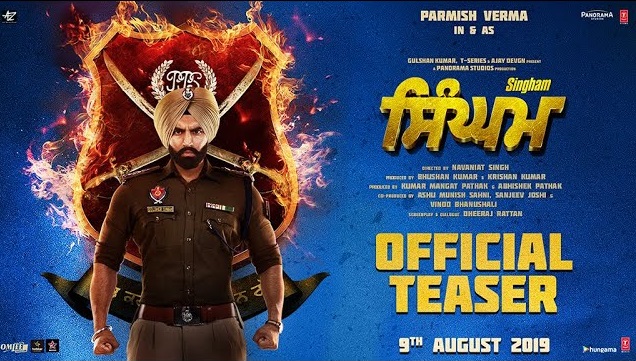 The singer turned actor Parmish Verma’s upcoming movie “Singham” teaser is out and is looting praises all around the world. The movie is a remake of Hindi movie Singham that staring Ajay Devgan, which was a further remake of “Singham” of Tamil director Hari’s Suriya.

The remake has been co-produced by Ajay Devgn Films and T-Series Films and directed by Navaniat Singh (Yamla Pagla Deewana: Phir Se). The cast includes Sonam Bajwa and Kartar Cheema.

T-Series head Bhushan Kumar said “Unlike what is believed, Punjabi films have an audience across the globe,” he said. “When the decision of producing Punjabi films was done, producing Singham remake was the right call.”Punjabi movies have universal appeal, Bhushan added.

Actor Ajay Devgn recently took to his Instagram and confirmed the release date Punjabi version of Singham of the film as well.

The movie is expected to release on 9th of August 2019. The plot of Hindi version of Singham revolves around an honest cop who finds himself in a tough spot when a corrupt politician (played by Prakash Raj) decides to go after him. The film is about the classic fight between evil and the good.

Parmish Verma and Sonam Bajwa are expected to re-create the chemistry of Ajay Devgn and Kajal Aggarwal from the Hindi film Singham.