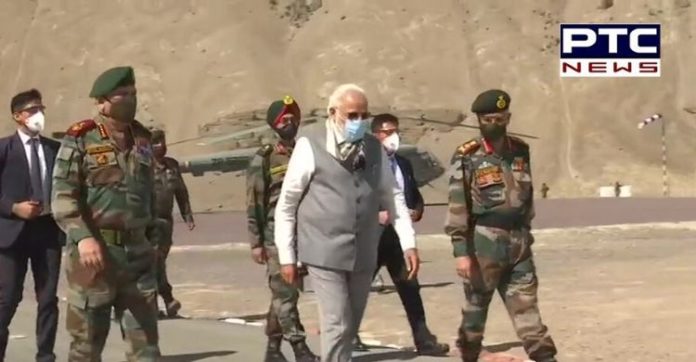 Prime Minister Narendra Modi on Friday made a surprise visit to Ladakh where he was briefed by the senior officials at a forward position in Nimu.

PM Modi is at one of the forward locations in Nimu, Ladakh where he reached in the early morning. The Prime Minister interacted with the personnel of the Indian Army, Air Force, and Indo-Tibetan Border Police (ITBP). Located at 11,000 feet, it is among the tough terrains which are surrounded by Zanskar range and on the banks of the Indus.

Earlier, the Defence Minister Rajnath Singh was scheduled to visit Ladakh on Friday to review the preparedness of the Indian Army amid the ongoing standoff with the neighbouring country China.

Earlier visuals of Prime Minister Narendra Modi's arrival in Ladakh, he was later briefed by senior officials in Nimmoo. pic.twitter.com/fDO6qvpMcM

The situation between India and China has tensed after 20 Indian Army jawans lost their lives in a violent face-off in Eastern Ladakh’s Galwan valley on June 15-16 when the Chinese troops tried to unilaterally change the status quo during the de-escalation.