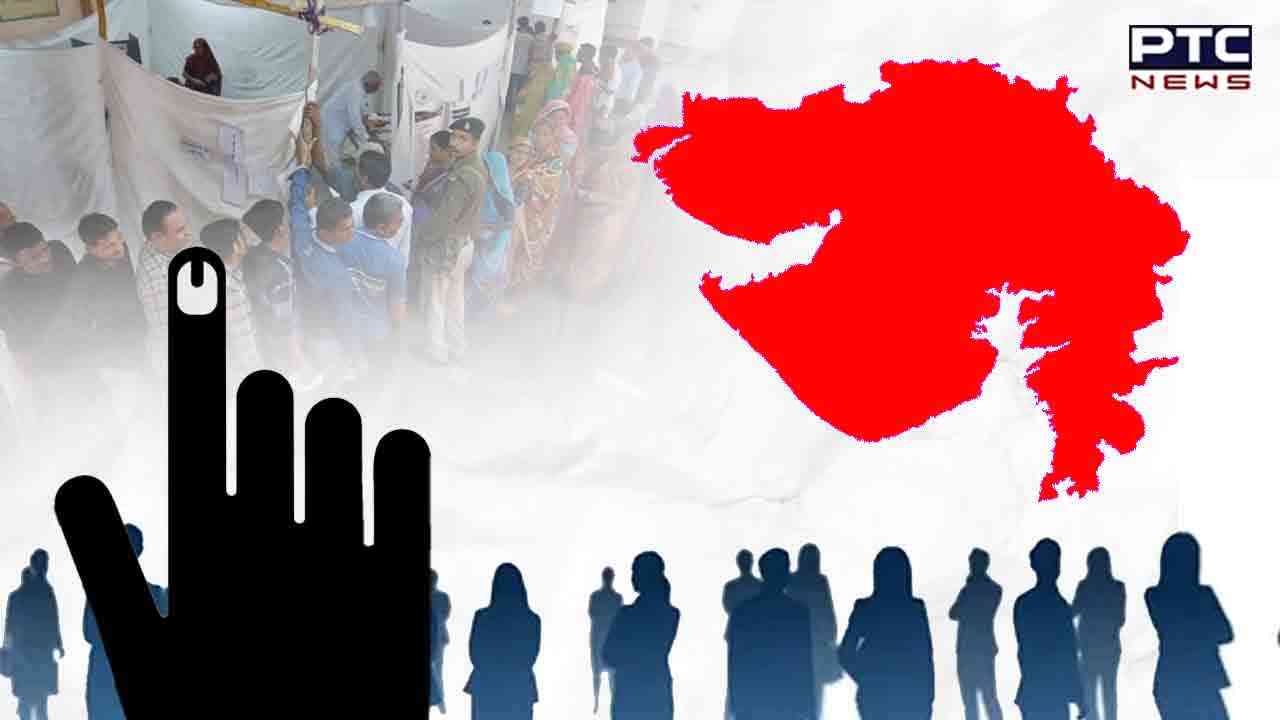 As the voting in the first phase of the Gujarat Assembly election is underway, the voter turnout inched closer to 50 per cent till 3 pm with a total turnout of 48.48 per cent.

The voting began at 8 am in 89 constituencies spread across 19 districts of Kutch, Saurashtra and South Gujarat on Thursday and will continue till 5 pm. The voter turnout was 34.65 per cent till 1 pm. According to the Election Commission data till 3 pm, Tapi recorded the highest voter turnout with 64.27 per cent voting while Narmada stood second with 63.88 per cent turnout. Dangs reported 58.55.

The political fate of 788 candidates will be sealed in the first phase of the Gujarat Assembly election, meanwhile live webcasting of 13,065 polling stations in 19 districts is underway to ensure transparency in the elections.

The polling started at 8 am today and will conclude at around 5 pm in 89 constituencies spread across 19 districts of Kutch, Saurashtra and South Gujarat. "There will be continuous observation from 6.30 am till the completion of the polling process through Live webcasting of more than 50 per cent of polling booths in the state to keep a close watch on the voting process during the assembly elections in Gujarat," said Gujarat's Chief Electoral Officer P Bharathi.

BJP bigwigs cast their votes in the first phase of polling in the Gujarat Assembly election in their respective constituencies on Thursday.

The polling is underway in 89 constituencies spread across 19 districts of Kutch, Saurashtra and South Gujarat. Exuding confidence in the BJP's victory in the ongoing elections, Union minister Darshana Jardosh said that they will be forming the government in the state with an absolute majority.

Gujarat Home Minster Harsh Sanghavi cast his vote for the first phase of the Gujarat Elections at a polling station in Surat Thursday.Notably, in these elections, Sanghavi is contesting for the Majura constituency seat in Gujarat. Polling for the first phase of the Gujarat Assembly election is underway amid tight security arrangements.The polling is taking place in 89 constituencies spread across 19 districts of Kutch, Saurashtra and South Gujarat.

Gujarat | AAP candidate Alpesh Kathiriya casts his vote in the first phase of #GujaratAssemblyPolls, at a polling station in Surat. pic.twitter.com/KwUplgVdTb

Cricketer Ravindra Jadeja on Thursday cast his vote at a polling station in Jamnagar in the first phase of the Gujarat Assembly elections and appealed to people to vote in large numbers.

His wife and BJP candidate Rivaba Jadeja voted in Rajkot earlier today. "I appeal to the people to vote in large numbers," said Ravindra Jadeja.

Notably, Ravindra Jadeja's wife Rivaba Jadeja is a BJP candidate from Jamnagar North while her father Anirudhsinh Jadeja and her sister Naina Jadeja had campaigned for Congress candidate.

Earlier while speaking to media, Rivaba Jadeja said that the BJP will win by a good margin.

Congress MLA Paresh Dhanani cast his vote for Assembly elections in Gujarat in a bizarre manner as he carried a 'gas cylinder' with him on the bicycle he was riding.

With the intention to underline the issues of high fuel prices, inflation and joblessness, the Congress MLA from Amreli went to the polling booth on a bicycle with a cylinder on it.

The people of Gujarat are all set to vote for the first phase of the assembly elections after intense campaigning by all the political parties.

Exuding confidence that the BJP will win with a good margin, BJP candidate from Jamnagar North Rivaba Jadeja on Thursday said that they would focus on the overall development of the State after forming the government.

Vansda BJP candidate Piyush Patel was going from Pratapnagar to Vandervela village with his supporters and was attacked at around 2:30 PM as the miscreants tried to vandalise his car.

The polling for the first phase of the Gujarat Assembly election is underway amid tight security arrangements. The polling is taking place in 89 constituencies spread across 19 districts of Kutch, Saurashtra and South Gujarat.

To motivate young voters, 33 polling stations being run by youth

To motivate and inspire young voters, for the first time, 33 polling centres will be managed by young polling parties during the first phase of the Gujarat Assembly elections, said Chief Election Commissioner Rajiv Kumar on Thursday.

Kumar said that over 4 lakh Persons with Disabilities (PwD) voters and 9.8 lakh senior citizen voters are in Gujarat.

"We are giving them all facilitations. It is an occasion to give equity and equality and show respect to them. Participation of over 10,000 centenarians and PwD voters should be an inspiration for all of us, especially our young voters. Over 182 polling stations are being managed by PwD staff," said the CEC.

A look at key players, constituencies

The second on the list is Morbi, which became a talking point following the tragic incident recently in which a suspension bridge fell into the river claiming the lives of over 130 people.

The BJP has fielded Kantilal Amrutiya, who replaced sitting MLA and Cabinet Minister Brijesh Merja, and he is up against Congress' Jayantilal Jerajbhai Patel and AAP's Pankaj Ransariya.

The Opposition parties, during the campaign, raised the issue of "mismanagement" in the Morbi incident, trying to corner the government on the incident.

Voting for the first phase of Gujarat Elections 2022 begins

Fate of the political parties will be decided by over 2 crore voters today, with 89 constituencies spread across 19 districts of Kutch, Saurashtra and South Gujarat going up for polling.

The Prime Minister's roadshow is likely to begin at 3:30 pm in the afternoon and is expected to go on till 6:30 pm this evening with PM Modi making at least 35 stops at the memorials of prominent personalities including Pandit Dindayal Upadhyay, Sardar Vallabhbhai Patel and Netaji Subhas Chandra Bose on the way.

Gujarat Assembly elections 2022: The first phase of polling for the Gujarat Assembly Election 2022 started on Thursday with 89 constituencies going to the polls. The ruling BJP is aiming for a record consecutive voting phase.

What is interesting in the Gujarat Assembly elections this time is that the entry of the Aam Aadmi Party (AAP), led by Arvind Kejriwal, has made it a triangular contest among the BJP, Congress and AAP.

According to the Gujarat's Chief Election Officer, in the first phase, 788 candidates are fighting for 19 districts in Southern Gujarat and Kutch-Saurashtra region.