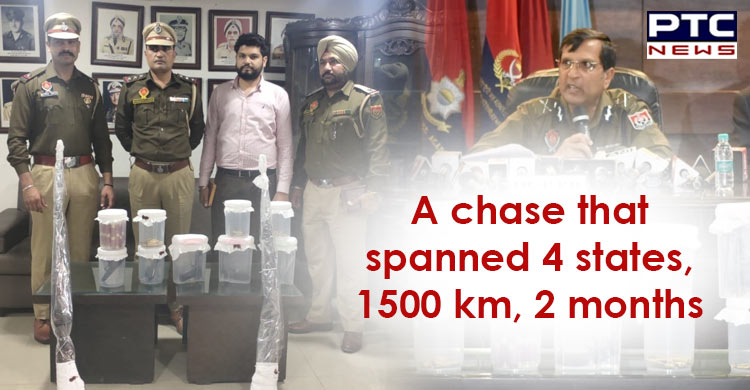 Continuing with their crackdown on criminal gangs and gangsters, the Punjab Police have arrested seven accused, including three most wanted gangster-criminals, after an over two-month-long, 1500 km chase that spanned four states, to solve a spate of heinous crimes, including the recent murder Gurdeep Singh, ex-Sarpanch of village Umarpura in district Amritsar (Rural).

Giving details of the meticulously planned and flawlessly executed intelligence-led operation, which covered the states of Punjab, Uttarakhand, Uttar Pradesh, and Rajasthan, DGP Dinkar Gupta on Monday disclosed that the trio were finally arrested from Sojat, District Pali, Rajasthan, on the basis of a tip-off provided to Rajasthan Police by the Punjab Police team. The accused had been changing their locations and creating various fake identities while being on the run.

Coming close on the heels of the arrest, from Armenia, of another noted gangster Buddha, these arrests showed that a large number of gangsters-criminals had moved out of Punjab to other States as well as to foreign countries due to the relentless and continued pressure from the Punjab Police and the OCCU, said the DGP.

The three most wanted criminals have been identified as Harman Bhullar, a resident of Umarpura, Amritsar, Balraj Singh of Basantkot, Gurdaspur, and Harwinder Sandhu from Pandori Waraich, Amritsar. They were all members of a criminal gang operated by Pavittar Singh, a gangster-criminal now based in the USA.

Pavittar Singh was leading the Chaura Madhra gang. Pavittar Singh is presently suspected to be in the USA. Husandeep is one of the close associates of Pavittar and, as per credible inputs, he is also living in the USA. The entire gang is involved in many cases of extortion, attempt to murder, murder, rioting, etc, said the DGP.

Harman Bhullar, Balraj Singh, and Harwinder Sandhu had arranged fake Aadhar Cards under the names of Mangal Singh, Ram Dev, and Mohinder Singh respectively. Harman Bhullar had also managed to get his fake Passport issued in the name of Harman Singh from the Regional Passport Office, Ambala, with a fake address of Pehowa, Kurukshetra, Haryana.

Gurdeep Singh, (55), former Sarpanch of village Umarpura, was shot dead by a group of armed assailants led by Harman Bhullar, when he was returning home from a village Gurudwara on January 1, 2020. Harwinder Sandhu, a member of Pavittar Gang, had also claimed responsibility for the killing of Mandeep Singh, 26, of Village Pandori Waraich, Amritsar (Rural), due to personal enmity.

Besides these two murders, the accused were also wanted in the recent attempt to murder case in which they fired gunshots, injuring one Triptpal Singh in November 2019 in village Jijayani in Amritsar (Rural), said the DGP. The accused, who had been on the run for the past several months, had flaunted their involvement in these cases on their social media posts.

According to the DGP, Harman Bhullar was involved in as many as 8 criminal cases while Balraj Singh was wanted in 10 criminal cases and Harwinder Sandhu in 3 criminal cases. Most of these cases related to serious offenses, such as murder, attempt to murder, abduction/kidnapping, rioting, Arms Act, etc.

Giving details of the joint operation, led by Bikramjit Singh Brar, DSP OCCU, under the supervision of Vikram Jeet Duggal, SSP Amritsar (Rural), the DGP said Gurmeet Singh Chauhan, AIG, Intelligence (OCCU) and RN Dhoke, ADGP Internal Security, were part of the teams, which were drawn from OCCU, SAS Nagar and Amritsar Rural districts. The entire operation was personally monitored by the DGP.

The chase, which started from Amritsar-Chandigarh on January 28, culminated successfully on March 1, as a result of the perfect inter-state coordination and cooperation between the police forces of the four states, said Gupta, pointing out that Constable Nasir Mohammad of Uttarakhand Police, in fact, traveled all the way from Rudrapur to Rajasthan during the operation.

The DGP said he had personally taken DGP Uttrakhand on board before the launch of the operation from Rudrapur in Uttrakhand. Later, senior officers of the UP Police and Rajasthan Police were also taken in the loop. All these teams first moved to Rudrapur, Uttarakhand and started chasing the criminals, who were traveling in an i20 car no. UK 04T 9229, covering various national highways, Toll Plazas, small village roads, etc. They kept moving continuously, criss-crossing various roads in the remote and interiors of different small towns and villages of various districts of Uttarakhand, UP and Rajasthan.

It was only in the early morning of 01.03.2020 that their movement again came to notice in Rajasthan in coordination with Highway authorities and CCTV footage. Chase teams of Punjab Police and the SOG Teams of Rajasthan Police were put on high alert. Finally, after one of the longest chases in policing covering a distance of over 1500 km, the trio was apprehended from Sojat, Dist Pali with the help of Rajasthan Police.

The breakthrough regarding the movement of the accused came when Ranbir Singh @ Lucky r/o Vill. Teeda, PS Mullanpur, SAS Nagar who was admitted in PGIMER, Chandigarh on Feb. 23, 2020, had accidentally shot himself with a countrymade weapon and the subsequent investigations led to the revelation of the weapon being provided by Harman Bhullar and his associate through one Harry Bajwa r/o Sec. 40, Chandigarh. Harry Bajwa had provided a safe house to the accused in Sec. 40, Chandigarh, where the accused have been staying for the last two months. Harry has also been arrested.

The arrest of these three criminals further led to arrest, on Monday morning from Uttrakhand, of two of their associates Gurpreet Singh @ Gopi s/o Avtar Singh r/o Tarapur, Dist Meerut, UP and Gurwinder Singh @ Khalsa s/o Lakhwinder Singh r/o Bazpur, Uttarakhand today. Both of them are also involved in various crimes, such as murder, attempt to murder, arms act, etc.

Names of the Arrested persons