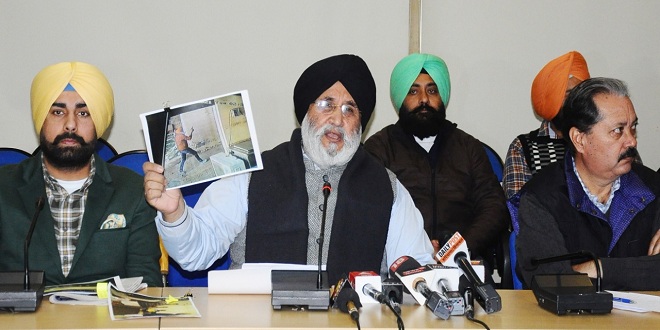 They also asked for the deployment of paramilitary forces to ensure free and fair elections.

Addressing a press conference at the party headquarters today, Dr. Daljit Singh Cheema said that in Zira the papers of the Opposition candidates were rejected, where all the 17 Congress candidates were declared uncontested winners.

He said that in the same manner Congress candidates have been declared uncontested winners in 8 out of 15 seats in Guruharsahai, 7 out of 11 in Maluka, 5 out of 13 in Mehraj, 4 out of 13 in Bhai Rupa, 6 in Mandi Gobindgarh and 8 in Ferozepur.

Opposition candidates’ papers have been rejected and the Congress has been declared the winner. He said that the papers of Shiromani Akali Dal candidates for 7 seats in Gidderbaha had also been rejected.

Demanding re-election in all these seats, Dr. Cheema said that at the behest of Congress MLAs, nomination papers have been rejected even after the expiry of the scrutiny period.  He added that Chief Minister Capt. Amarinder Singh is a partner in this and has broken his promise to ensure free and fair elections in the recent all party meeting.

The SAD leader said that the Shiromani Akali Dal had no choice but to go to the courts and the Governor of Punjab. He said that it was a very bad day for democracy when a constitutional authority like the state election commissioner had abdicated its responsibility towards the people and he was allowing the Congress party and the state government to kill the democracy in the state.

He said that never before has the State Election Commission been ineffective. Adding, that it had even refused to take notice of the mass rejection of the papers of the Opposition and had not taken any action against the civil and police officers who were engaging in violence against the Opposition along with Congress.

Dr. Cheema said that there was video evidence of Congress councilors attacking the houses of Shiromani Akali Dal candidates, vandalizing vehicles and firing indiscriminately at them.