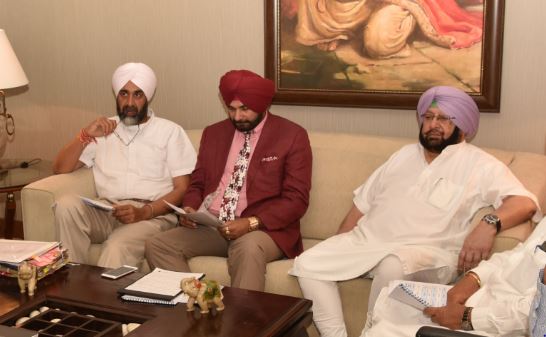 Chandigarh: Even as he ordered further tightening of the noose around the mining mafia in the state, Punjab Chief Minister Captain Amarinder Singh on Saturday assured that the recent spike in prices of sand and gravel, triggered by his government’s crackdown on illegal mining, would get reversed as more legal mines become operational over the next few days.

The Captain Amarinder government has come down heavily on the mining mafia, which flourished during the erstwhile Badal regime, initiating several measures to curb illegal mining in the state. This has led to a temporary spike in the price of sand/bajri, with even the legally operated mines cutting down on production as a precautionary step, taking an excessively cautious approach in the face of the government action.

Officials of the Directorate of Mines, Department of Industries and Commerce, made a detailed presentation at the meeting, highlighting the mining situation in the state and the measures being taken by the department to check illegal mining and improve the supply situation.

The Chief Minister directed the officials that a new transparent mining policy should be formulated within 30 days and asked them to submit its draft for a further review.

An official spokesperson of the Chief Minister’s Office (CMO) later said Captain Amarinder had made it clear that the price hike was temporary and the prices of sand and gravel would come down as legal mines start becoming operational.

The meeting discussed various measures to improve the supply situation, including increase in the number of legal mines, deployment of modern digging techniques and stringent enforcement of rules to ensure that illegal mining becomes unviable, the spokesperson disclosed.

It was suggested that permits of de-silting and dredging of sand be given to the Irrigation Department to further augment the sand supply and make bajri available in the market at affordable rates.

The concerned officials informed the Chief Minister during the meeting that 59 mines were ready for auction, with the department already having issued their 15-days auction notice. Auction will be held on April 18, with allotment to take place on April 20 and production to commence by May 20. Another 58 mines, whose environmental clearance is currently pending, are likely to be auctioned within 60 days thereafter, and will become operational by mid- August.

To ensure transparency in mine auctions, the meeting mulled introduction of pre-qualification criteria for mining.

Steps to secure speedy environmental clearances for new mines and better coordination of enforcement measures were some of the other suggestions discussed at the meeting, which was informed that the Police Department had provided one SP rank officer and two DSP rank officers to check illegal mining. Districts have been allotted to these officers for inspection purposes.

A District Mining Helpline with dedicated mobile, landline number & email ID is being set up, in addition to a PB-GRAMS portal for illegal mining complaints. Use of modern tools will also help check pilferage, the concerned officials told the meeting, listing down various measures being undertaken to come down against illegal mining.

Since the equipment used for illegal mining is released by the lower courts soon after its confiscation during the action against illegal miners, the meeting decided to request the Department of Home Affairs & Justice to constitute Special Courts for the speedy and effective trial of offences for contravention of the legal provisions and guidelines on mining, said the official spokesperson.