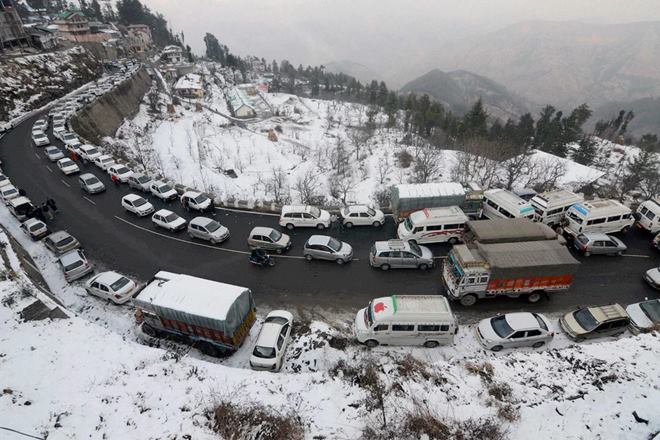 Shimla and Manali continued to experience snowfall on the second day on Tuesday, while lower hills across Himachal Pradesh were lashed by rain, leading to a drop in the temperature by several notches.

Tourist spots near Shimla like Kufri, Fagu, and Narkanda also experienced snowfall. Shimla saw 13.8 cm snow, while it was 13 cm in Manali.

Snowfall might occur in Shimla, Kullu, Kinnaur, Lahaul-Spiti and Chamba districts till Wednesday, as per Meteorological office Director Manmohan Singh.

"The higher reaches have been experiencing moderate to heavy snowfall since early Monday," he added.

The minimum temperature in Shimla was recorded at zero degree Celsius.

Keylong in Lahaul and Spiti district was the coldest place in the state at minus 5.9 degrees Celsius. It saw 25 cm snow.

It was 3.4 degrees Celsius in Dharamsala, minus 2.2 degrees in Kalpa, minus one degree in Manali, minus 1.7 degrees in Dalhousie and minus 2.8 degrees in Kufri.