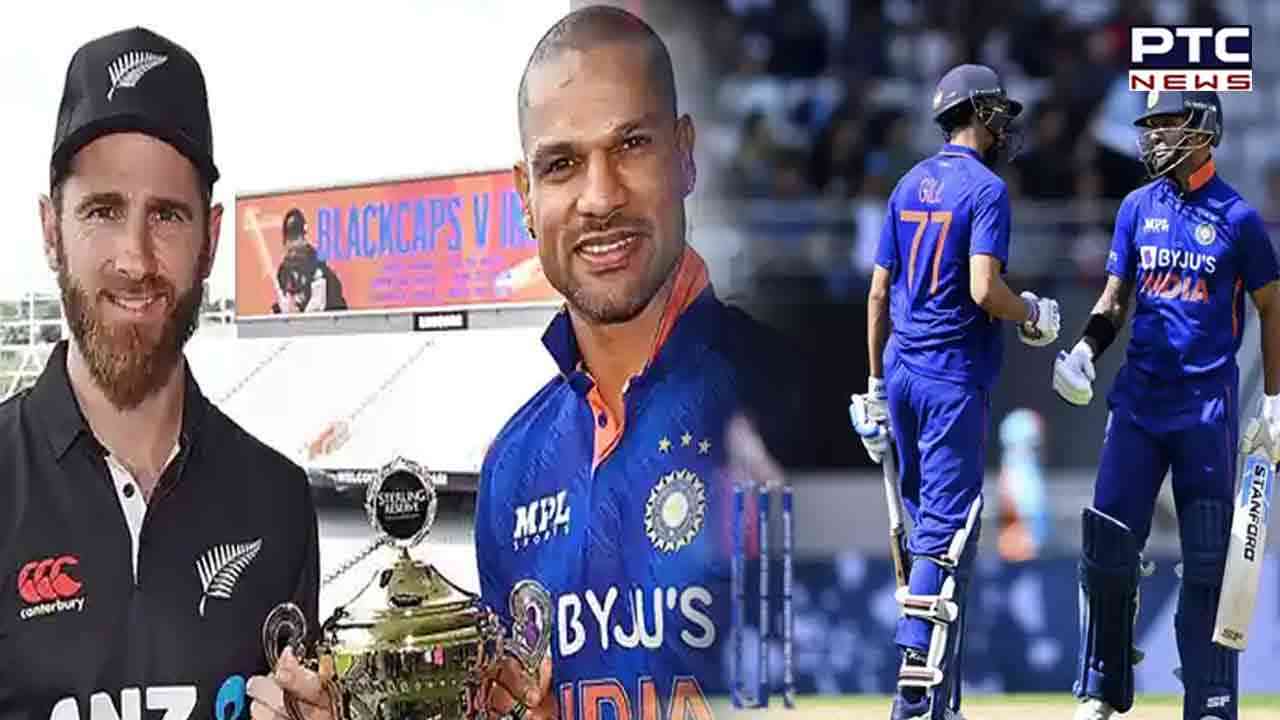 Auckland, November 25: A late flourish from Washington Sundar and sublime batting performances from other batters helped India post a daunting total of 306/7 against New Zealand at Eden Park in Auckland on Friday.

Top knocks from Shreyas, Shikhar Dhawan, and Shubhman Gill helped India get past the 300-run mark in the first ODI of the three-match series as India raked in 96 runs from the last 10 overs. Invited to bat first by New Zealand, India got off to a steady start with openers Shikhar Dhawan and Shubhman Gill playing out the new ball.

India had managed to put in just 16 runs after the completion of the first five overs but Gill found form in the sixth over as he smashed Matt Henry for a six straight down the ground.

The partnership picked pace after that as the duo started finding gaps and unfurled a range of strokes to up the scoring rate.

Gill played a superb uppercut to Henry, guiding a well-directed short ball for six over the keeper's head, taking India's score to 40/0 at the end of the 10 overs.

Lockie Ferguson faced the brunt of Dhawan's bat as the left-hander smashed him for two consecutive fours in the 15th over.

The Indian captain brought up his fifty in the 21st over ad raised his bat to acknowledge the crowd after smashing Adam Milne for a boundary over wide long-on.

India's total also reached the 100-run mark in the same over, with another boundary from the southpaw.

Left-arm spinner Mitchell Santner was smashed for a six and a boundary in the very next over, with both batsmen looking to make rapid strides to take the team's scoring rate higher.

Right-hander Gill reached his fourth ODI fifty off 64 balls in the 23rd over while Dhawan continued to make merry and up the ante.

However, the opening partnership was broken by Ferguson as he dismissed Gill, who was looking to clear the square leg boundary but found the fielder.

Pant managed to get an outside edge for four on his first ball and struggled to time the ball in his brief inning, continuing his slump in form in the limited overs format. Ferguson dismissed the left-hander for 15 off 23 balls.

In-form batter Suryakumar walked in to bat at five and hit a lovely cover drive on his first ball but was dismissed on the third ball to give Ferguson his third scalp.

The much-talked-about Sanju Samson walked out to bat at number six to stem the flow of wickets and steady the Indian innings. He stitched a crucial 94-run partnership with Iyer and played second fiddle in it.

Iyer played his trademark shots to propel the Indian innings and reached his fifty in the 42nd over, adding yet another brilliant inning to his prolific 2022 ODI season.

Just when the duo looked to explode, Milne dismissed Samson to bring in all-rounder Washington Sundar.

The Kolkata Knight Rider's captain was sublime in his short making as he kept finding boundaries at regular intervals. He also found an able partner in Sundar who took to the last five overs like a fish to water and smashed boundaries at will. The duo smashed 46 runs in just 28 balls.

Ferguson was the pick of the bowlers as he scalped three wickets giving away just 59 runs in his 10 overs.