CM must and will have to accept the demand for restoration of the old pattern for class 12 : Sukhbir Singh Badal 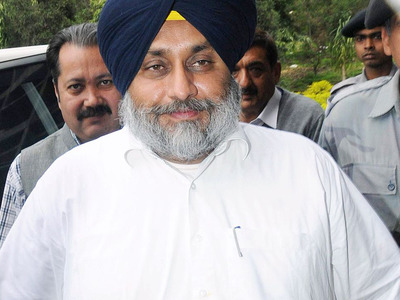 The SAD president and former Punjab Deputy CM, Sukhbir Singh Badal today reiterated that his party and its allies wanted the government to undo the damage inflicted on imparting Sikh history to the students of the Board class 12 and to restore all the 23 chapters deleted from the syllabus of that class. “ For us, it is a very solemn religious, academic and emotional issue. There is no scope for anyone to play politics with this sensitive and serious issues concerning the history and heritage bequeathed to us by the great Guru Sahiban.”

In a statement here, the SAD president said , “ We want the outrage against Sikh history to be undone. The statement of the Punjab Chief Minister Captain Amarinder Singh yesterday represents an implied acknowledgement of the fact that grave injustice has been done to the Punjab and the Sikh history, heritage, religion, culture and legacy. Although he has not said so in so many words, but it is clear now that he no longer sees any justification in the drastic and dangerous changes brought in the history syllabus for class 12 . For the first time now, he has even talked about the need to review the decision to delete and expunge Sikh history from the academically significant and Board-monitored exam of Class 12. There is no justification for shifting the study of of this momentous part of history including the history of the great Guru Sahiban and Sikh icons from the senior and professionally important class 12 to class 11 the exams for which are monitored locally by school managements.

“The immense academic significance of Class 12 can not be compared with the locally monitored class 11. Deleted chapters of history must therefore be restored to Class 12 syllabus,” said the Akali president.

“The deletion of Sikh history for senior students smacked of a conspiracy to destroy the roots of our religious and cultural legacy for the present and future generations of our children. That is unacceptable and will never be tolerated,” said Mr. Badal in a statement here this afternoon

Mr Badal said that although Captain Singh has not stated it categorically yet, his statement of yesterday shows that he is “feeling the pressure of harsh truth against him” and had finally been forced to see the writing on the wall. He will have to accept the position maintained by all eminent Sikh historians, academicians, opinion makers and also by the SAD-BJP. Instead of wrongly and stoutly defending the deletion of Sikh history as he was doing till yesterday, the CM must and will have to accept the demand for restoration of the old pattern for class 12. He has talked about the need and possibility of a review of the controversial changes brought about in this regards . But we will judge him by his concrete action. All the 23 chapters on Sikh history which have been deleted from Class 12 must be restored in that very class immediately so that students do not suffer. Till then, our demand and struggle will continue, ” said Mr Badal.

Mr. Badal said that instead of passing the buck, the CM should tell the people of Punjab the whole truth that the changes in the syllabus for class 12 have been made during the tenure of his government. ” The history of each one of the great Guru Sahibaan was being taught in class 12 during 2013, 2014, 2015, 2016 and even last year. The disastrous changes are being made only this year. How can the CM blame the previous govt for decisions taken and implemented by his own govt this year?”asked Mr Badal.

Mr Badal refused to comment on the “remarks of petty and personal nature” made by the CM against him ( Sukhbir Singh Badal), especially the CM’s “boastfulness over his own knowledge of Sikh history. “ One does not have to an academician to grasp the boundless significance of the teaching of Sikh history to our children. Every child born in Punjab knows its significance by heart. But isn’t it strange and ironical that Captain Amarinder Singh , himself an author and scholar of Sikh history, has as Chief minister presided over the murder of the history of Punjab and in particular the history of the advent and rise of the great Sikh religion and the great Guru Sahiban. If Captain Singh were an ignorant man, he could be given the benefit of doubt. But ironically his own claims of being a historian have put him in the history’s dock. History never forgives those who try to distort or destroy it.”

Referring to Captain Singh’s latest statement in which the Chief Minister “has expressed his willingness to review the whole issue” , Mr. Badal said that this stand of the CM was diametrically opposed to his earlier stand in which he had strongly but without the least justification defended the decision under his government to “play havouc with the glorious and unmatched history of the brave and patriotic Sikh community. Earlier, he had fiercely defended the deletion of 23 chapters on Sikh history from the professionally significant Class 12, claiming that these were not being dropped, deleted or expunged but only being adjusted in the lower class 11.”

Mr Badal strongly re-iterated that the entire Sikh history which had been thrown out must be retained in the Class 12, as this Class is monitored by the Board and therefore it has much greater professional significance in a students career than the locally monitored Class 11.”

Mr Badal said that this was and is the real issue, and not adjusting class 12 chapters in class 11.