Tens of thousands march in protests across Italy 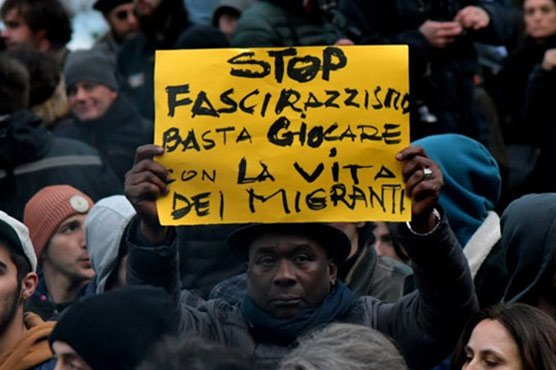 Tens of thousands of people marched in rival far-right and anti-fascist demonstrations across Italy saturday, with isolated clashes erupting as tensions threatened to boil over ahead of next weekend's election.

Police estimated that between 15,000 and 20,000 people attended a campaign rally in Milan led by Matteo Salvini the head of anti-immigration group The League, which said the number was more like 50,000. 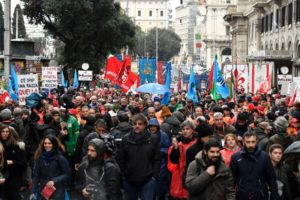 The group, formerly known as the Northern League, is part of ex-prime minister Silvio Berlusconi's, right wing coalition which opinion polls suggest is leading ahead of the March 4 election. "Italians first," Salvini, who hopes become the country's next leader, told the crowd. 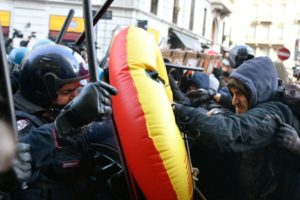 Violence briefly broke out at another Milan demonstration, with police in riot gear briefly grappling with anti-fascist protests marching in reaction to a rally by the neo-fascist CasaPound movement.

There has been a dramatic uptick in violent incidents between anti facist and far-right activists in recent weeks, and more than 3,000 police were mobilised for demonstrations in Rome on Saturday. However the biggest march in the Italian capital remained calm, with a sea of red and green union flags waving in the cold rain.

"We are here to say no to fascism, because there are too many toxic incidents at the moment, it must not come back," Rita Solo of the CGIL union told AFP. Prime Minister Paolo Gentiloni and former leftist PM Matteo Renzi, who is vying to regain the top spot, briefly attended the demonstration, which was organised by the National Association of Italian Partisans (ANPI), under the slogan "Fascism Never Again".

Protesters shot firecrackers towards police at another protest in Rome, which was organised by a left-wing union to rail against labor reforms.

Earlier in the day in Milan, hundreds of anti-fascist activists, many of them holding Communist Party flags, had gathered in a square to protest.

"We find it really shocking that two demonstrations by racist parties were authorised in Milan," said local activist Gianni Fossati. The climate was tense in Palermo, Sicily ahead of an evening rally by the extreme-right Forza Nuova group, after one of the party's activists was beaten up by men wearing masks there on Tuesday.

There have been numerous clashes between anti-fascist and far-right activists across the country, particularly after a racially motivated attack on February 3 by a far-right gunman in the central city of Macerata that left six African migrants wounded.

The violence comes amid fears of a revival of far-right groups in the election, after several European countries have shifted to the right in recent years against a backdrop of economic and migration woes.

An average of the last major opinion polls suggested Berlusconi's right-wing coalition, which includes his Forza Italia (Go Italy) party, The League and the far-right Brothers of Italy, could finish on top, but fail to achieve a parliamentary majority. (AFP)