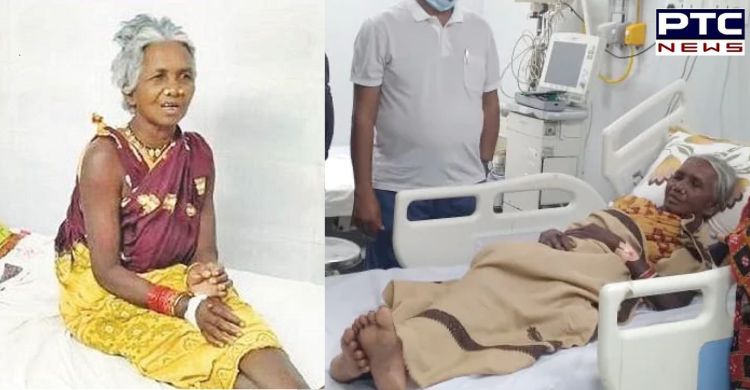 Koraput (Odisha), September 3: The Paraja tribe of Odisha's Koraput district has strongly denounced the video of Padma awardee Kamala Pujari, in which she was allegedly forced to dance by a female social worker on Monday inside the ICU of SCB Medical College and Hospital while receiving treatment.

The Paraja community has demanded strong action against the female social worker for insulting their community and forcing Kamala Pujari to dance. Narendra Kandaliya, a member of the Aadivasi Society after submitting a memorandum to the collector in Jaypore, Koraput, said, "Pujari is the pride of our community and inspiration. We strongly condemn it. It is an insult to our community. The way she was forced to dance we demand strong action against the so-called social worker. If the government fails to take action against the self-proclaimed female social worker- in the next few days we may resort to a mass agitation across Koraput, Malkangiri, Nabarangpur, and Rayagada districts."

During the interview, Kamala Pujari stated, "I never wanted to dance but was forced to do it. I repeatedly denied it, but she (social worker Mamata Behera) did not listen. I was sick and got tired."

She went on to say that a woman from Sunabeda, near Koraput district, approached her and asked for a Dhemsa dance in front of a camera.

BB Pradhan, Sub Collector of Jeypore, Koraput, addressed the issue, saying, It's unfortunate that Kamala Pujari was forced to dance while she was in a hospital for her treatment. We will enquire about the matter further."

Pradhan further stated that the way Padma Shri Kamala Pujari was treated and forced to dance is a matter of regret and added that the case is a violation of human rights.

The 72-year-old woman, Kamala Pujari, was admitted to the district headquarters hospital in Jeypore with fever and loose motion. She was later shifted to the SCB Medical College and Hospital in Cuttack on August 24 after her condition worsened. Kamala Pujari was discharged from the hospital on Monday.

A native of Patraput village in Jeypore block, Kamala Pujari received the Padma Shri award in 2019 for her services to agriculture in the field of organic farming. In 2002, she earned the Equator Initiative Award in Johannesburg, South Africa, for her efforts to preserve indigenous paddy varieties.