Tennis player Alison Riske stunned the fans as she gets married to her partner Stephen Amritraj, a week after defeating World No.1 Tennis player Ashleigh Barty in Wimbledon. Stephen Amritraj represented India earlier, is the son of former World Tour player Anand Amritraj. The wedding took place in Pittsburgh and one video is making rounds on the Internet, in which Alison Riske and her sister Sarah were dancing on a Bollywood number. 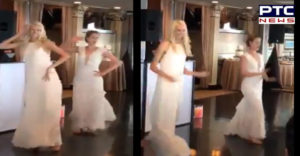 Moments after the marriage of Alison Riske and Stephen Amritraj, Riske posted a video on Twitter, in which she and her sister were dancing on the Baar Baar Dekho song Nachde Ne Saare.

officially an Amritraj! I’m the luckiest lady because of @stephenamritraj ! where all my new Indian followers at??!! here’s a little Bollywood to try to win over your affection! ??? pic.twitter.com/ejX29aT5cF

Alison Riske and Sarah were looking adorable and the way they have recreated the Katrina Kaif and Siddharth Malhotra song Nachde Ne Saare is looking prettiest video on the Internet these days. Alison tweeted the video and captioned it as, “officially an Amritraj! I’m the luckiest lady because of Stephen Amritraj! where all my new Indian followers at??!! here’s a little Bollywood to try to win over your affection!”.

Yay!! Congratulations.. to you and @stephenamritraj ❤️ those moves btw ???? https://t.co/VXUJeetN4J

Likewise, Indian Tennis player Sania Mirza retweeted the video and congratulated her for her wedding with Stephen Amritraj. Also, she lauded her moves on Nachde Ne Saare. She said, “Yay!! Congratulations to you and Stephen Amritraj, those moves btw”.

Despite great performance in the Wimbledon 2019, she failed to reach semi-finals. Alison Riske was defeated by her American player Serena Williams, who won the match by 6-4 4-6 6-3.