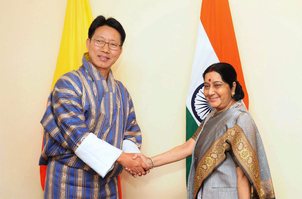 Kathmandu: External Affairs Minister Sushma Swaraj today met her Bhutanese counterpart Damcho Dorji, who hoped that the standoff between Indian and Chinese troops in the Dokalam area of the Sikkim sector is resolved "peacefully and amicably".

The comments by Dorji came after his meeting with Swaraj on the sidelines of the BIMSTEC foreign ministers' meeting here.

"We hope the situation in Dokalam will be resolved peacefully and amicably," Dorji told reporters.

This was the first official reaction from Bhutan after Beijing's claim that the Himalayan nation had acknowledged that Dokalam belonged to China. However, China had not offered any evidence to support its claim.

Both Swaraj and Dorji are here to attend a meeting of foreign ministers from the countries of the Bay of Bengal Initiative for Multi-Sectoral Technical and Economic Cooperation (BIMSTEC), a grouping of countries in South Asia and South East Asia.

However, there was no official word from the Indian side on what was discussed during the meeting.

"Time with a close friend and neighbour. The external affairs minister meets with foreign minister of Bhutan Damcho Dorji on sidelines of BIMSTEC Foreign Ministers' meet," Ministry of External Affairs spokesperson Raveesh Kumar tweeted and also posted a picture of the meeting.

The meeting between the two leaders comes against the backdrop of the current standoff in Dokalam -- a trijunction between India, China and Bhutan.

India and China have been locked in a face-off in the Dokalam area of the Sikkim sector since June 16 after Indian troops stopped the Chinese People's Liberation Army from building a road in the area.

BIMSTEC has very important role for India and greater energy needs to be injected into the BIMSTEC movement, he said.

"The BIMSTEC has made an important journey in the past two decades and we need to explore untapped resources through the regional grouping for our benefit," he said.