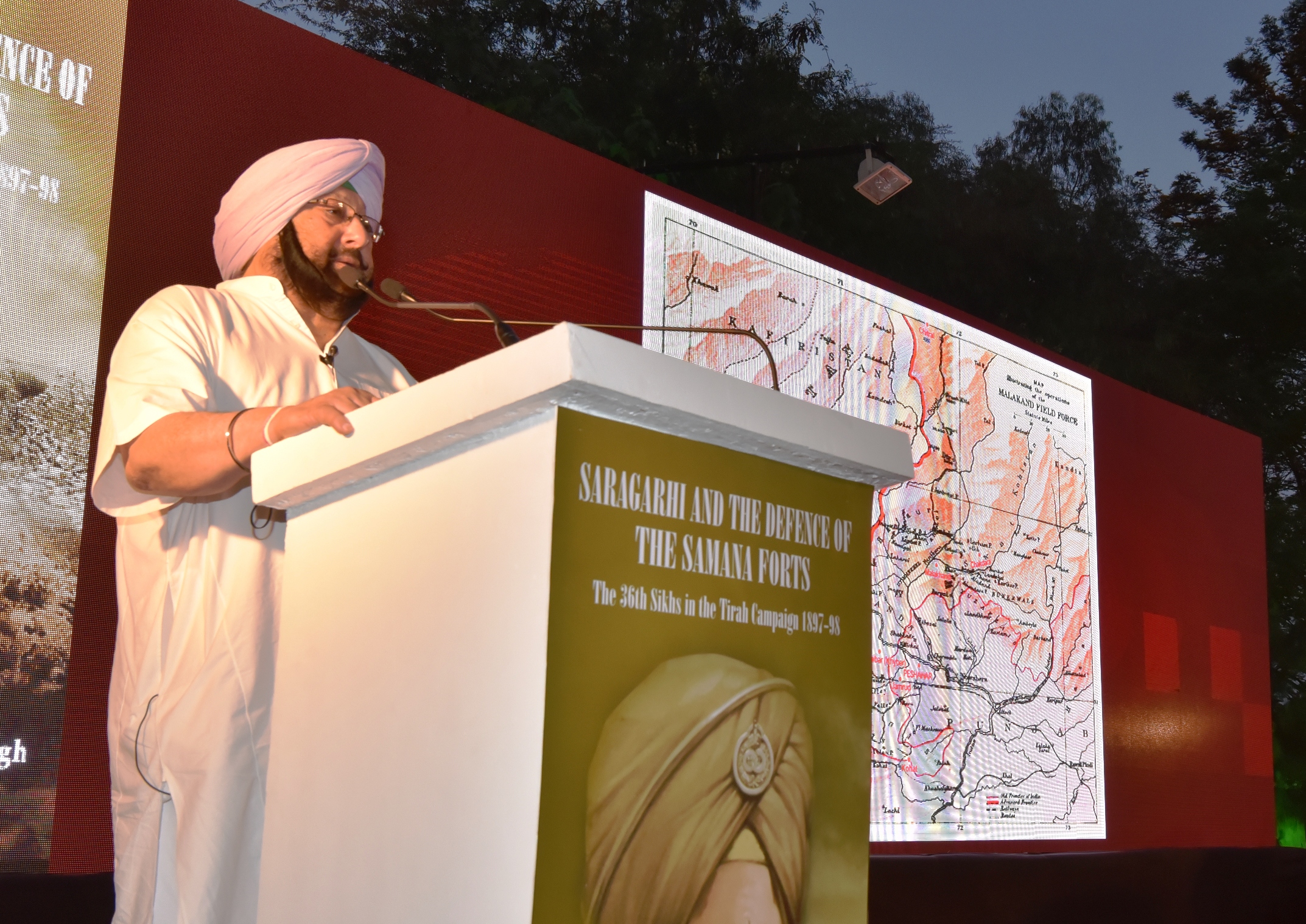 Chandigarh: The book launch turned out to be an event as memorable as the battle the book glorifies. Punjab Chief Minister Captain Amarinder Singh unveiled his latest, and perhaps the most iconic book — `The 36th Sikhs in the Tirah Campaign 1897-98 – Saragarhi and the defence of the Samana forts’ — amid a distinguished gathering of political and media luminaries, as well as several senior Army officers, with Punjab Governor VP Singh Badnore as the guest of honour.

Captain Amarinder presented a copy of his book to the Governor at the event, which also witnessed a panel discussion with senior journalists Mr. Shekhar Gupta and Mr. Vir Sanghvi, and Brigadier Inderjeet Singh Gakhal of the Sikh Regiment. Actor Randeep Hooda, who is the star of the upcoming movie based on Saragarhi, joined the lively interaction.

Speaking on the occasion, Governor Badnore suggested that the state government start a literary festival in Chandigarh, to be focused only on defence and war. Captain Amarinder immediately accepted the suggestion and announced October 27 as the tentative date for holding the maiden fest.

The battle of Saragarhi stands out as an iconic moment in India’s military history, made more epic by the narrative woven around it by Captain Amarinder Singh, an ex-Army officer turned military historian who has the honour of belonging to the celebrated 36th Sikhs, of which the book talks.

The book is a homage to the 21 men of the 36th Sikhs, who, led by Havaldar Ishar Singh, laid down their lives fighting in what was, perhaps, the greatest last stands of all times. It is in particular dedicated to the lone NCE - the 22nd man, generally known as Dad, who also died fighting during the battle, having picked up a weapon and killed a few tribals before falling in the last moments of the battle. Hooda essays the role of Hav Ishar Singh in the movie on the Saragarhi battle.

As an emotional Captain Amarinder put it, “In many ways, it was an untold story, waiting to be told. While there are many books and articles on the Battle of Saragarhi, the Tirah Campaign, in its entirety, had remained somewhat obscured. I wanted to share the story of Tirah, and in particular the story of Dad – the 22nd man, whose name or religion remains unknown till date and about whom even the source of his origin remains unclear except that he came somewhere from Naushera.”

With some lopsided rules preventing Dad from being honoured like the other 21 who died fighting the Afghan tribals in the battle, he continues to remain lost in the sands of time, says Captain Amarinder, pointing out that his book was a small effort to put things in perspective.

In response to a request from the audience, the Chief Minister promised a suitable memorial for Hav Ishar Singh in his village, as well as for some other soldiers who had laid their lives for their country.

During the panel discussion, the panelists discussed the various facets of the battle which, till date, remains etched as a story of inspiration and a reminder of how, when pushed to the brink, men can rise beyond their human capacities.

The panelists lamented the fact that tribal warfare in the neighbouring Pakistan continues to remain as brutal as it was during the Tirah Campaign. Tribals live in their own isolated world, said Captain Amarinder, terming it as a tragedy that atrocious treatment is still meted out to prisoners by such tribals, such as the Taliban, even now.

It was unfortunate, said Shekhar Gupta, that people enjoy glorifying such atrocities when it suits them. The problem, he said, was the history of kinship and blood feuds which tribals continue to have while living under autonomous governance, which needed to be eliminated. He also stressed the need to end the prevalent gun culture, pointing out that the Aghanistan and Pakistani civilians have more guns than the defence forces of many countries, including India.

The proceeds of the book, launched in the 120th year of the battle, will go the Ludhiana Welfare Association for decapitated soldiers, orphans and widows.

The Chief Minister, who completed the book during the peak of his election campaign, earlier took the audience through some of the most exciting and emotional moments of the Tirah Campaign through a presentation that brought the battle alive for them on the sprawling lawns of Hotel Lalit here.

This story of valour, to quote Captain Amarinder, “remains the 36th Sikhs’ greatest achievement.” “It set the benchmark for the battalion to follow.” For the uninitiated, Saragarhi was a post that connected British India forts of Lockhart and Gulistan on the border areas of Afghanistan.

As Captain Amarinder further recalled, the battle, which took place on 12th September 1897, was fought by a “small platoon minus of the 36th Sikhs which battled against 8,000 tribals.” “These valiant men fought for 6 hours and 45 minutes before all 22 fell. They chose death rather than surrender,” he writes in his book. As he told the gathering, these men knew it was their last day on earth but refused to give up.

With several original and recreated photographs to add a visual appeal to the story, the book takes the reader, through an exciting mix of description and narration, along some of the most epoch moments in the Tirah Campaign. From exhaustive descriptions of the weapons used, to detailed maps, it brings the campaign, culminating in the historic battle of Saragarhi, alive, making the reader feel a part of the exceptional journey.

He plans to follow up this book with another on Bangladesh war and finally, one on Punjab over the past 50 years, Captain Amarinder said in response to a question during the panel discussion.

The event concluded with the 10th Guru Recitation and Jaikara by the troops of the 8th Battalion of the Sikh Regiment, giving way to the Last Post/Rouse.

Major General Tarlochan Singh who looks after the Saragarhi Memorial also spoke on the occasion, congratulating the Chief Minister for his brave description of the Saragarhi Battle.