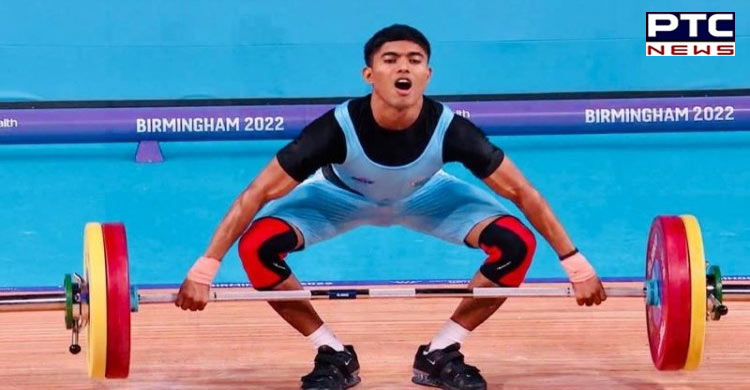 Birmingham, July 30: Indian weightlifter Sanket Sargar has opened India's account by winning a silver medal with a combined lift of 248 kg in the men's 55 kg final at the ongoing Commonwealth Games 2022 in Birmingham.

He finished as the leader in the Snatch category with 113 kg and slipped to second in the clean and jerk category with 135 kg due to an injury in his second attempt. Aniq Kasdan of Malaysia won the gold medal and challenged the Indian throughout the event, ending with a combined lift of 249 kg, consisting of 107 kg in snatch and 142 kg in clean and jerk.

Sri Lanka's Dilanka Isuru Kumara won the bronze with a combined lift of 225 kg. He lifted a best of 105 kg in the snatch category and 120 in clean and jerk.

Sri Lanka's Dilanka Isuru Kumara upped the required standard for Sargar and lifted 112 kg. Sargar responded by successfully lifting an incredible 113 in his final attempt. With Dilanka's lift being declared as 'no lift' later, Sargar finished the snatch leaderboard at the top position.

With Sargar at the top in Snatch, the competitors headed to the clean and jerk lift category. The 22-year-old made an immediate impact in his first clean and jerk attempt as he lifted the required 135 kg to go to the very top of the leaderboard.

The Indian weightlifter missed out on the Gold medal because of the unfortunate injury in his second clean and jerk attempt but ended with a silver nonetheless. Kasdan won the gold medal for Malaysia. Sanket Sagar hails from Sangli in Maharashtra. The 22-year-old is the reigning national-level champion in his weight category of 55 kg. Earlier in February this year, he had qualified for Commonwealth Games with his performance at the Singapore Weightlifting International event.

At that event, he not only earned his qualification for the multi-sport event, but also smashed the Commonwealth Championships and National Level record with a combined lift of 256 kg, which consists of 113 kg in the Snatch category and 143 in the Clean and Jerk category. This performance earned him a gold medal at the event.

At the Commonwealth Weightlifting Championships in December 2021 in Tashkent, he won a gold medal with a lift of 113 kg, which also helped him create a new national record in the Snatch category.