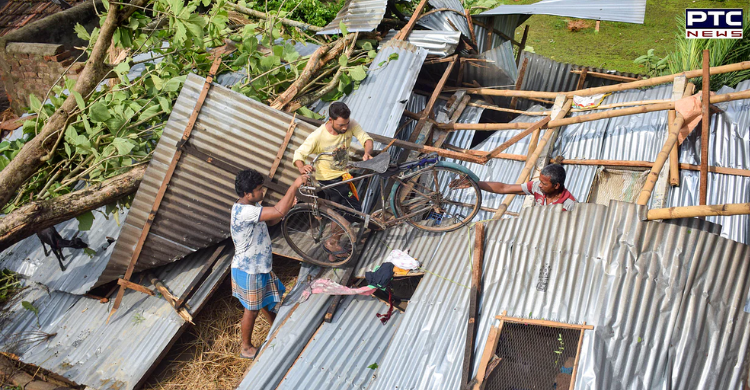 Cyclone Sitrang: Several houses were damaged due to Cyclone Sitrang which caused heavy rainfall and a storm in the Nagaon district of Assam.

Numerous trees and electric poles were also uprooted in various parts of the region due to the cyclonic storm on Monday night.

As per reports, several houses in the Kaliabor, Bamuni, Sakmuthia tea estate, and Boraligaon areas of the central Assam district have been damaged due to the storm.

No casualties due to the storm have been reported so far in the area.

"Several houses were damaged and many trees uprooted in the storm in our Kaliabor area. As a government village headman, I have visited the entire village and I will submit the damage report to our Circle Officer," said the village headman

Meanwhile, the tides have hit the coast of Bakkhali beach in South 24 Parganas in West Bengal amid the cyclone 'Sitrang' alert.

The Civil defence is alerting the tourists and locals not to venture near the sea.

Notably, the India Meteorological Department (IMD) on Tuesday informed that the remnant of the cyclonic storm "Sitrang" which created a deep depression over Bangladesh has further weakened into a depression over northeast Bangladesh, north-northeast of Agartala and south-southwest of Shillong.

Widespread rainfall accompanied by thunderstorms, lightning, and heavy to very heavy and extremely heavy rain at isolated places is likely to occur over Tripura on Monday and Tuesday, said the India Meteorological Department (IMD) on Monday.

"There is a high chance of rain on October 25. There is an appeal to the people to avoid going out unnecessarily or to the sea areas including the Sundarbans. The state govt has made arrangements," CM Mamata Banerjee said.