Alleged cop is assaulting his gang members in Bathinda Jail 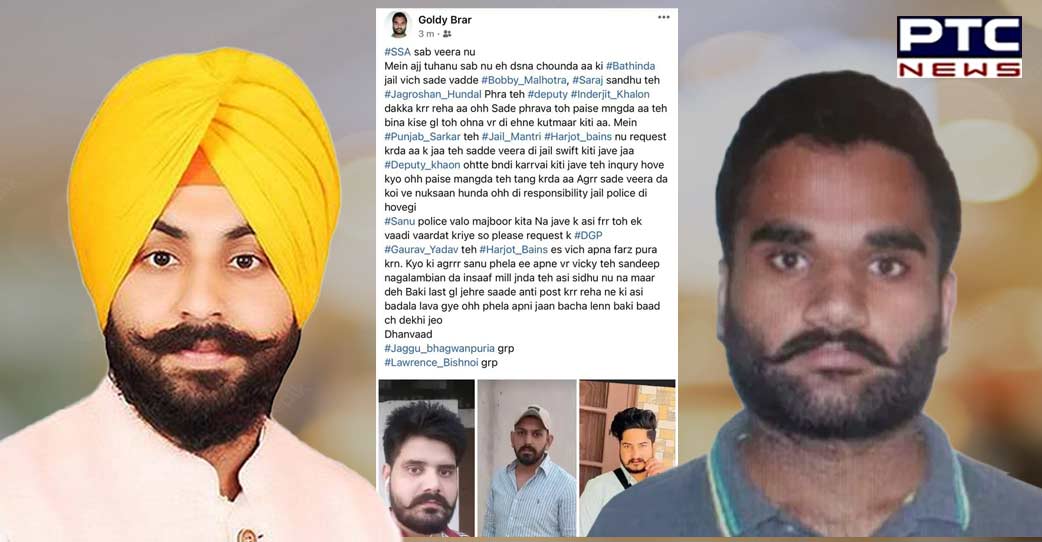 Chandigarh, August 29: Gangster Goldy Brar of the Lawrence Bishnoi group, the mastermind behind the murder of Punjabi singer Sidhu Moosewala, has issued "a threat to the DGP, Punjab Police, and state Jails Minister Harjot Bains.

In a social media post, Goldy Brar said "our brothers Saraj Sandhu, Bobby Malhotra and Jagroshan Hundal are being harassed in Bathinda Jail. DGP Gaurav Yadav and Jail Minister Harjot Bains should take action against the Deputy Superintendent of Jail; else be ready for bigger crime'.

“The Police should not force us to do big crimes again. DGP Gaurav Yadav and Jails Minister Harjot Bains should do their duty. If we had already got justice for Vicky Middukhera and Sandeep Nangal Ambia, we would not have killed Sidhu Moosewala,” said gangster Goldy Brar in his social media post.

He tagged Jail Minister Harjot Bains and demanded that the inmates be shifted to another jail.

Reacting to the post, Jails Minister Harjot Bains said the gangsters were levelling false allegations because they were not getting illegal facilities in the jail like earlier.

He warned that this way police was forcing them to commit “a bigger crime” again. He also tagged DGP and claimed that if they had got justice in Sandeep Ambian case, then they would not have killed Punjabi singer Sidhu Moosewala.

Punjabi singer Sidhu Moosewala was shot dead on May 29. The responsibility of which was taken by gangster Goldy Brar. Brar called it revenge for Vicky Middukheda's murder. Vicky was killed in Mohali by the shooter of Bambiha gang. According to the Punjab Police, it was Goldie Brar who is based in Canada, carried out the entire conspiracy of Moosewala murder at the behest of Lawrence Bishnoi.