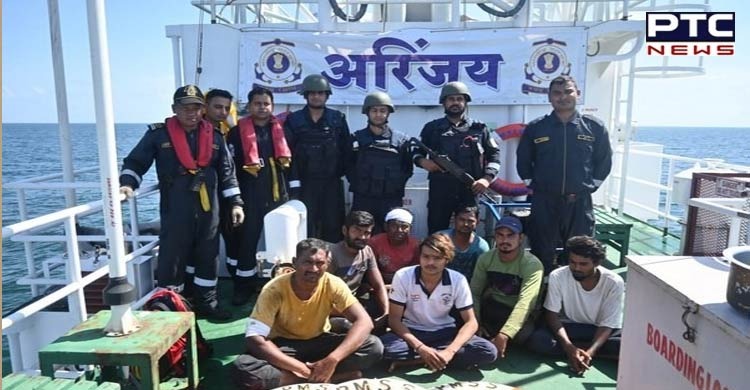 New Delhi, October 14: In a major success on the high seas, an Indian Coast Guard ship acted swiftly to free Indian fishermen who were being taken to a Pakistani port by the Pakistan Maritime Security Agency (PMSA).

The incident took place on October 6 when the Indian Coast Guard ship Arinjay received information about an emergency involving an Indian fishing boat Harsiddhi-5 from Jakhau which was involved in fishing activities close to the maritime boundary line off the Gujarat coast, Indian Coast Guard officials told ANI. "On receipt of the information regarding distress onboard Harsiddhi, on radio, ICG ship on patrol immediately proceeded with maximum speed towards the reported position," they said.

As soon as it reached there, the ICG ship motives debris of the fishing boat along with one survivor in the water and a few lifebuoys of Pakistan Maritime Security Agency Ship (PMSS) Barkat in the area.

The ship recovered the partially conscious survivor and administered first aid to the survivor who informed that the PMSS Barkat had fired on the Indian and fishing boat and hit twice during the dark hours of October 6 which resulted in the sinking of the boat.

The survivor also informed that six out of seven crew were then captured onboard by the Pak ship. The ICG ship on learning about it started moving towards the Pakistani bot and communicated to PMSS Barkat to release the Indian crew immediately as they were captured on the Indian side of IMBL.

In due course, PMSS Barkat complied and released the crew to the ICG ship at IMBL resulting in the release and safety of all seven crew, the officials said.

The crew were administered first aid and brought to Jakhau.

The matter regarding the firing and hitting of IFB is being investigated and will be taken up accordingly through appropriate channels and FIR has been registered in the incident.