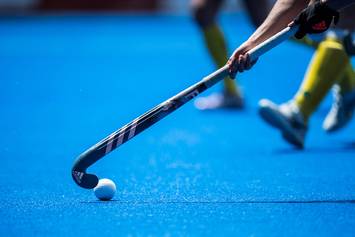 Lausanne, June 4: The Indian men's hockey team registered a 4-3 win against Switzerland and played out a 2-2- draw against Pakistan in their first two matches of the opening day of the FIH Hockey 5s Lausanne 2022 here on Saturday.

The Indian men's hockey team led by Gurinder Singh edged out the hosts Switzerland 4-3 in their first match of the FIH Hockey 5s Lausanne 2022. Mohammed Raheel (2', 10'), Rabichandra Moirangthem (5'), and Captain Gurinder Singh (19') scored in India's thrilling win, while Jonas Winkler (6'), Fabio Reinhard (11'), and Patrick Kruesi (16') were the goalscorers for Switzerland. India made an attacking start to their first match with fast-paced set-play and scored through Mohammed Raheel in the second minute of the game. India extended their lead as Rabichandra Moirangthem made no mistake to convert the Challenge Goal in the fifth minute.

A minute later, Switzerland pulled a goal back through Jonas Winkler's strike. In the 10th, Mohammed Raheel scored his second goal of the match to give India a 3-1 lead at the end of the first half.

A quick start to the second half saw Switzerland score their second goal in the 11th minute through Fabio Reinhard, who made a run from the right flank, beating Indian defenders to find the back of the net. Having improved their performance in the second period, the home side equalized through Patrick Kruesi in the 16th minute.

With both teams looking for a winner, they created various goalscoring opportunities in the remaining four minutes of the match but their goalkeepers stood tall and made some fine saves. In the 19th minute, India took the lead through Captain Gurinder's strike, and in the end, it was goalkeeper Pawan who ensured India pick up a 4-3 win by blocking Switzerland's stroke in the last minute.

In the second match, the Indian Men's Hockey Team played out a dramatic 2-2 draw against Pakistan. Mohammed Raheel (1') and Gursahibjit Singh (18') were the goalscorers for India, while Arshad (7') and Abdul Rehman (20') scored for Pakistan in an intense match.

Riding high on confidence following their first match win, India started the match aggressively right from the start as in-form Mohammed Raheel opened the scoring in the very first minute of the match. India went on to dominate the proceedings and made some quick exchanges to extend their lead.

However, in the 7th minute, Pakistan scored an equalizer through Arshad Liaqat's strike. Both teams did create some goalscoring opportunities in the closing minutes of the first half, but their defenses marinated composure to keep the scores locked at 1-1 at half-time.
Both teams started the second half brightly and made some threatening moves in front of each other's goal but missed out on converting their chances. India regained the lead through Gursahibjit Singh's strike in the 18th minute, but with just a few seconds to go, Abdul Rehman drew parity for Pakistan, thus ending the thrilling contest on level terms.
\The Indian Men's Hockey Team will face Malaysia in their next match on Sunday.