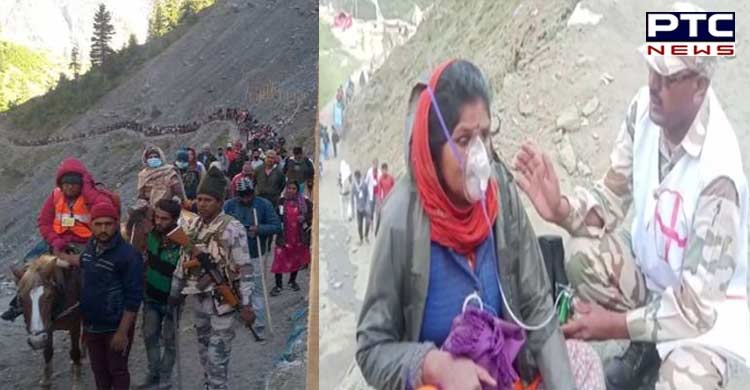 New Delhi, July 3: In yet another life-saving effort, the mountain-trained Indo-Tibetan Border Police (ITBP) troops, while doing security duties of the Amarnath Yatra-2022, have been in providing oxygen support to the needy pilgrims at high altitude points.

As Amarnath Yatra commenced amid high security on June 30, the ITBP personnel till July 2 provided oxygen support to more than 50 pilgrims who were feeling sick due to lack of oxygen.

According to ITBP spokesperson Vivek Kumar Pandey, the route from Mahaguns top (14,000 feet) to Sheshnag (12,324 feet) is frequently travelled by ITBP forces who experience cases of breathlessness and high altitude effect.

"Our men have been briefed to look for such pilgrims who show symptoms of breathlessness and high altitude sickness and we have put our medical assistance systems on high alert, as some of the pilgrims are suddenly showing such symptoms. The ITBP medics are there with oxygen cylinders and providing oxygen to the needy pilgrims. Their Blood Pressure is also checked," Pandey added.

Furthermore, the ITBP has been monitoring the areas to look for pilgrims who require any form of medical treatment in addition to providing first aid to the pilgrims as needed.

According to Pandey, the ITBP staff is also taking the injured to the hospital and bringing them to the Sheshnag camp by carrying them on stretchers.

Over the years, the ITBP has consistently offered such assistance during the Amarnath Yatra.