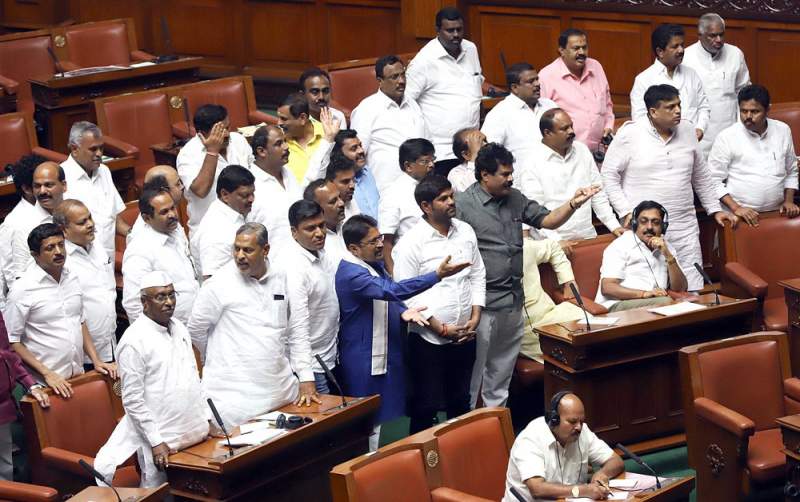 The Karnataka Assembly on Friday failed to meet two deadlines set by Governor Vajubhai Vala to complete the trust vote today after Chief Minister HD Kumaraswamy challenged the directive and the ruling coalition not in a mood to comply with it.

The trust vote will now be held on Monday, July 22 with the ruling party leaders claiming that a number of speakers were still there to participate in the debate on the confidence motion moved by Kumaraswamy on Thursday. After a day-long debate and drama marked by heated exchanges between the ruling and opposition members over the powers of a Governor and the need to respect his directive.

As the House resumed proceedings in the morning, the Governor shot off a missive to the Chief Minister to prove his majority by 1:30 pm. There was a lot of debate on the directive itself and in the midst of uproar, Speaker KR Ramesh Kumar adjourned the House till 3 pm.

This was followed by another directive from the Governor that the confidence vote business should be completed by 6 pm.

Intervening in the debate, Kumaraswamy virtually ruled out proving his majority in the Assembly by the second deadline set by the Governor, when he sought protection from the Assembly Speaker in the matter.

He said the "second love letter" sent by Vala asking him to prove majority in the Assembly before 6 pm today hurt him and asked him whether he came to know of horse-trading only now.

"I leave the decision on the floor test to you (the Speaker). It won't be directed by Delhi. I request you to protect me from the letter sent by the Governor," Kumaraswamy had said.
The Chief Minister also moved the Supreme Court challenging the Governor's directive to the government saying it was in violation of well-settled law laid down by the court.

He and Karnataka Pradesh Congress Chief Dinesh Gundu Rao challenged in the apex court its July 17 order which they contended fettered the political parties' right to issue a whip to its MLAs to attend the proceedings of the House in the confidence motion. They were seeking clarification on the July 17 order which allowed the 15 rebel MLAs now holed up in a Mumbai hotel the freedom to participate or not.

Displaying photos of BJP leader BS Yeddyurappa's personal assistant Santosh purportedly boarding a plane with independent MLA H Nagesh in the Assembly, the chief minister suggested that horse-trading indulged in by BJP was on for the last 10 days.

"I have respect for the Governor. But the second love letter from the Governor has hurt me. He only came to know about horse-trading 10 days ago?" he said.

After missing the 1.30 pm deadline, Kumaraswamy received a fresh directive from the Governor to prove his government's majority on the floor of the state Assembly by 6 pm today.

The 13-month-old Congress-JDS government slumped into a minority earlier this month following the resignation of several dissident MLAs.
Sixteen MLAs from the ruling coalition including thirteen Congress and three JD(S) MLAs have resigned.

The state Assembly has 225 members, including one nominated MLA. The halfway mark in the 225-member Assembly is 113. (ANI)