Debutant China played yet another draw to stay in contention for a place in knockout stage of the Odisha Hockey Men’s World Cup in Bhubaneswar on Tuesday. In its second game played before a roaring Kalinga Stadium, China held Ireland to 1-1 draw.

The drawn game, the second in as many matches, puts China at number two position behind pool leaders Australia while England gets relegated to the bottom of the table with one point.

Goals for both the teams came within two minutes of each other in the third quarter. For Alan Sothern of Ireland, who scored the equalizer, his effort got him the man of the match award.

Ireland definitely had an edge as it enjoyed better ball control and worked out some good moves. China, however, played robust hockey thwarting all moves of its opponents with grit and skill.

Intriguingly, 2018 is the Chinese year of Dog. Acknowledged as “under dogs” of the tournament, the debutant Chinese have packed some surprises for their pool opponents.

After a goalless first half, the third quarter turned out to be exciting and eventful with both teams scoring one goal. First it was China to score from an indirect penalty corner conversion through Jin Guo. The first goal of the match came in the 43rd minute. And before the third quarter could end, Alan Sothern brought the teams at par with a brilliant conversion flick. 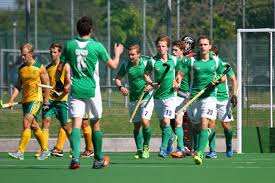 Though there is not much of a hockey history between the two nations, Ireland had won both of its earlier encounters against China with margins of 6-0 and 4-0 respectively. But China hawked headlines when it held the 1986 silver medalist England to a 2-2 draw in its first ever World Cup game.

Man of the match: Alan Sothern