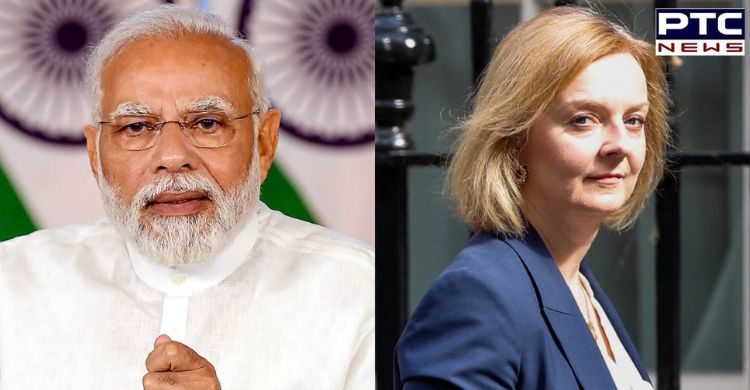 New Delhi, September 10: Prime Minister Narendra Modi on Saturday held a telephonic conversation with his British counterpart Liz Truss and extended his condolences over the demise of Queen Elizabeth II.

"On behalf of the people of India, Prime Minister Modi conveyed deep condolences to the Royal family and the people of UK on the sad demise of Her Majesty Queen Elizabeth II," a government press release stated.

The Indian Prime Minister also congratulated Truss on assuming the office of the Prime Minister of UK and appreciated her contributions to the India-UK bilateral relationship in her previous roles as Trade Secretary and Foreign Secretary.

Both leaders agreed to strengthen India's and the United Kingdom's Comprehensive Strategic Partnership.

According to a government release, the two leaders discussed a variety of bilateral issues, including the progress of the Roadmap 2030 implementation, ongoing FTA discussions, defence and security cooperation, and people-to-people ties between the two nations.

Modi expressed his condolences for Queen Elizabeth II's demise on Thursday, praising her "inspiring leadership." Taking on Twitter, the Prime Minister recalled his memorable meetings with the Queen during his 2015 and 2018 visits to the UK.

"I will never forget her warmth and kindness. During one of the meetings, she showed me the handkerchief Mahatma Gandhi gifted her at her wedding. I will always cherish that gesture," PM said on Twitter.

"She provided inspiring leadership to her nation and people. She personified dignity and decency in public life. Pained by her demise. My thoughts are with her family and people of the UK in this sad hour," he added.