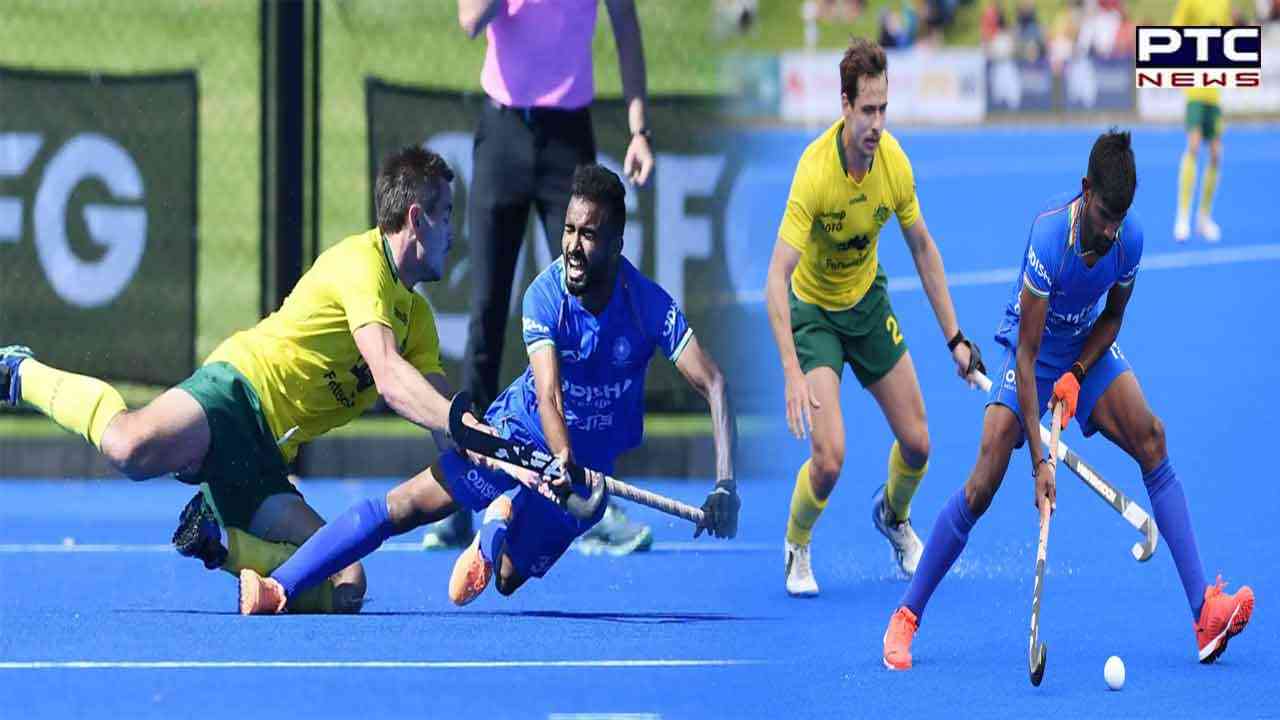 Adelaide (Australia), November 27: India and Australia played another high-octane match at the Mate Stadium in Adelaide on Sunday, with both teams scoring some blistering goals.

In a match that saw Eddie Ockenden reach 400 international caps for Australia, it was the home team that eventually won 7-4. This victory follows their 5-4 victory in the first match on Saturday, giving them a 2-0 lead in the five-match series, according to a press release from Hockey India.

India got off to a swift start in the first quarter winning a penalty corner as early as the third minute of the game. In-form India Skipper Harmanpreet Singh, who was the highest goal-scorer in the previous edition of the FIH Hockey Pro League, was on target to beat Australia goalie Johan Durst, giving his team a fine 1-0 lead. It took Australia a few minutes to overcome an early setback and responded to it only in the 12th minute when they were awarded a PC after India's foot-foul in the striking circle.

Blake Govers, who struck twice in the last three minutes fetching his team a winning start to their campaign on Saturday, scored the equaliser via a well-worked PC. The next quarter belonged to the hosts as put the Indian defence under the pump, scoring three back-to-back goals. A double by Welch in the 17th and 24th minute gave Australia a 3-1 lead. Though India midfielder Hardik Singh scored a brilliant goal after a smart interception, reducing the lead to 2-3 in the 25th minute, Govers' 27th-minute goal doubled their lead to 4-2.

After the ten-minute half-time break, India returned to the pitch with an improvised attack resulting in a PC. A superb variation saw Mohd Raheel deflect from the right side of the post after a powerful drag flick by Harmanpreet Singh. This goal brought some respite to the India camp with the lead narrowing down to 3-4. India did well to keep the home team from scoring in this quarter despite giving away a couple of PCs.

However, the final quarter witnessed the Australians come out all guns firing. They marauded the Indian defence with a clinical performance by the forward line. Anderson scored in the 48th minute followed by Whetton scoring in the 49th minute. Giving India no chance of recovering, Govers added to the score line taking their lead to a remarkable 7-3 when he scored off a penalty stroke in the 53rd minute.

Raheel's efforts in the frontline saw India winning a PC in the final moments of the match. After re-taking the PC four times, India was awarded a stroke after a dangerous play decision by the umpire. Harmanpreet converted the stroke with ease, ending the match at 7-4.